I tried out deep fake app Doublicat. The results were terrifying 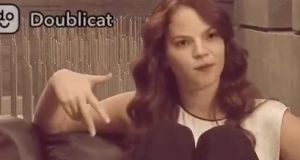 Doublicat: face swap app uses AI to paste your face on to GIFs

It finally happened. Technology has plunged me into an existential crisis. The culprit? Deep fake GIF and meme creator Doublicat.

Let me explain. The app allows you to take a selfie (or a photo of a friend) and pastes your face on to a GIF or meme in its library. You can then send the results to your friends, family, people you want to terrify to the very core of their being, or post it to Instagram.

The concept behind the app is both clever and concerning. It takes only a few seconds for your face to be overlaid on that of Taylor Swift, Brad Pitt or Paul Rudd with his head hanging out the car window. Your overlaid face will adopt the same expressions as the original, in theory. You might get a bit of weirdness if there’s a lot of face movement, but on the whole, it’s an interesting experiment.

Or at least if you use someone else’s face. The problem is that even when it works perfectly, seeing yourself on someone else’s body makes you look at yourself in a whole new light. It’s not necessarily a flattering one either. You find yourself asking questions like “does my face really look that weird?” or “Is my nose really that shape?”. I never noticed the furrow between my eyebrows before, and I’m not entirely sure the lighting is to blame for the many other weird things that popped up. It looks like me, but all wrong.

The app is also limited, in that you currently have to take the photo live rather than uploading one from your phone’s album – potentially one with more flattering light. You can also only use the library of GIFs already in Doublicat.

I sent some to my sister. The response? “Stop lol. It’s weird.” She was right. They were also mainly unflattering. This app doesn’t do much for the ego.

The idea of deep fakes is that they are supposed to be convincing. Most of my attempts at Doublicat were, sadly, not. There is no way that anyone would think these GIFs are genuinely me. Thankfully.

But what, you might ask, is Doublicat doing with all these facial scans? Nothing much, apparently. In the privacy policy, it says it may collect usage data, and information about your IP address and device. But it won’t use your facial scans for face recognition, and facial feature data is only stored for a maximum of 30 days after you last use the app. Your photos are stored locally after the first 24 hours too.

So according to their privacy policy, Doublicat is not using your photos to build a detailed facial recognition database. If you want to superimpose your face on top of Mark Hamill’s and pretend to be Luke Skywalker, fill your boots.

Just be prepared that the result may not be the AI face swap you were looking for.

1 Chris Johns: Ireland risks populist culture war between young and old
2 ‘Life in Vilnius reminds me of Ireland in the 1990s’
3 Dublin housebuilder records €11m gain after striking deal with bankers
4 Boeing identifies new software flaw in grounded 737 Max
5 The Irish economy is thriving but if you’re not feeling it – here’s why
Real news has value SUBSCRIBE