Netflix will not be joining Apple’s new TV service 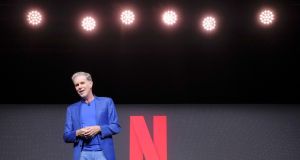 Netflix chief executive Reed Hastings has confirmed the company will not be joining Apple’s new content streaming service, which is due to be announced next week.

Speaking at a press event in Los Angeles on Monday, Mr Hastings also admitted that increased competition in the market was making it more expensive to source content.

Netflix, which has 139 million subscribers globally, spent $12 billion (€10.6 billion) on content last year and analysts expect that to increase to $15 billion in 2019.

During the press briefing, Mr Hasting firmly ruled out the possibility of Netflix participating in Apple’s new service, which is expected to offer original content and will likely resell access to other subscription services.

“Apple’s a great company,” said Mr Hastings. “We want people to watch our content on our service.”

The company’s refusal to get onboard with Apple isn’t unexpected nor is Mr Hasting’s admission that the tech giant’s move into streaming will make access to content more difficult to source.

Apple isn’t the only new competitor for Netflix, which already goes head-to-head with Amazon. Disney is lining up a new streaming service as are a host of other players in the US, including Warner Media.

Mr Hastings said while the company was aware of increased competition, the challenge was to “not get too distracted by them”.

“The key to us is to focus on our customers and how do we produce amazing stories for them. You can learn things by looking at competitors, but you don’t want to get focused on them,” he said.

“All we have to do to succeed is continue to do amazing content, stream it, make it personalised and relevant,” he added.

Mr Hastings said Netflix would compete with new entrants “with difficulty”, given their deep pockets.

“These are amazing, large, well-funded companies … but you do your best job when you have great competitors,” he said.

“They’re going to do some great shows. I’m going to be envious,” Mr Hastings added.

Apple is hosting an event in California on Monday next at which it is due to formally announce its new streaming service which will include new content from a number of Hollywood stars including Reese Witherspoon and Jennifer Aniston.