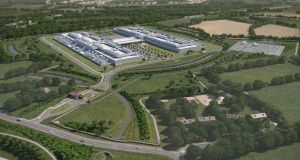 Facebook is set to almost double the size of its data centre in Co Meath, with the construction of two new buildings.

The company confirmed it would go ahead with plans to increase the size of the Clonee data centre from 86,000sq m (925,700sq ft) to almost 150,000sq m (1.6 million sq ft) after planning permission was granted for two further halls at the site.

Construction on the new buildings will begin later this year.

Facebook said the expansion would result in hundreds of millions of euro in incremental investment in Clonee, along with additional jobs during construction and operations.

The €300 million data centre was granted permission in 2015. Work began on the centre in April 2016, with the first phase comprising two buildings housing data halls linked by an administration building.

The data centre is supported by 100 per cent renewable energy, a commitment Facebook has reiterated with its latest announcement.

In a post on its Facebook page, the company said Ireland and Clonee had been “great partners from the beginning”.