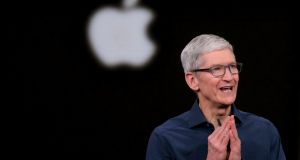 Steve Jobs told his biographer in 2011 that Apple had “finally cracked” a winning formula for television. But eight years later, his successor Tim Cook is still trying to win a place in his customers’ living rooms.

For more than a decade, Apple has toyed with the idea of making its own television sets and pitched cable companies on various kinds of software integrations and bundled services.

Now, after several false starts, Apple is ready to unveil its latest vision for TV, with an event at its Cupertino headquarters next week titled “It’s show time”.

Mr Cook’s latest bet is that an acceleration in cord-cutting and the proliferation of streaming services has created a new role for Apple as aggregator. Apple wants to reinvent the TV guide with a personalised slate of programming drawn from a wide range of sources, including a few shows of its own.

Even getting as far as launching a new service is something of an achievement for Apple. Unlike the music and telecoms industries, which have been forced to cede control to Apple through the iPod and iPhone eras, pay-TV operators have proven able to cling on to their direct relationship with customers.

Instead of trying to reorient the TV experience around an iPhone-like grid of apps from the likes of Netflix, Disney or HBO, Apple’s new TV platform is likely to put the focus on individual shows.

Its existing “TV” app, which is already available on iPhones and iPads as well as the Apple TV box itself, is designed around each individual viewer’s favourite series, with personalised recommendations for other TV and movies drawn from a wide range of providers.

Until now, however, shows from key providers such as Netflix have been absent from Apple’s TV guide.

With Hollywood still on the fence about teaming with the iPhone maker, Apple embarked on a radical change in its television strategy two years ago. It hired two well-regarded executives, Jamie Erlicht and Zack Van Amburg, from Sony Pictures TV. Armed with a billion-dollar budget, they began to commission its own original TV shows and now has more than 30 series in the works from big-name talents including Oprah Winfrey and Steven Spielberg.

Apple just needs one those original shows to become a hit - perhaps its new drama starring Reese Witherspoon and Jennifer Aniston, a sci-fi epic based on Isaac Asimov’s Foundation novels, or a mystery thriller from Sixth Sense director M Night Shyamalan - to pull in viewers to its TV app.

As it scouted for shows, Hollywood executives say that Apple has sought out high-quality content at a time when Netflix is chasing the mass market with a huge volume of original shows. “Apple are taking a lot of pride in being very curated, with a smaller but higher-quality offering,” said one producer who has worked with both companies.

However, some in Hollywood have struggled to adjust to the secrecy and exacting standards with which Apple typically approaches all its products. While Apple could show an “abundance of caution at taking each little step”, the producer said, the company is also anxious not to develop a reputation that it is difficult to work with. “They want the best creative talent to work there, not find [APPLE]so maddening that they give up.”

Analysts estimate Apple could charge $10 to $15 a month for a subscription video service that includes its original shows. The company needs new sources of income to counteract the iPhone’s recent declines and meet its $50bn services revenue target by 2020.

Some on Wall Street are sceptical that a video service can make a meaningful impact. Analysts at Goldman Sachs said in a note this week that even if 20m people sign up to a $15 monthly fee, by 2020 it would generate only $3.6bn in annual revenues - barely 1 per cent of Apple’s $265.6bn total sales last year - and add less than half of 1 per cent to Wall Street’s consensus earnings estimates.

To bolster the income from its own shows, Apple has also spent many months negotiating deals with television networks and film studios to offer their content too.

Viacom and CBS are in advanced talks to license programmes to Apple, while AT&T-owned HBO has also held talks, said people familiar with the matter. WarnerMedia’s other content is not being discussed but could be in the future, these people said.

The pricing would mirror the structure of Amazon’s Channels, in which Prime customers can pay an additional monthly fee for individual subscriptions to other streaming services, such as Nickelodeon’s Noggin, aimed at pre-school kids. “You basically have an easy flow of the content back and forth between different brands,” said one person with knowledge of the plans.

Hollywood executives are tempted to team up with Apple because of its massive reach, but are also wary of the potential costs of further ceding control of their content to tech giants. Within Apple’s ecosystem, they may not be privy to information about who their customers are or what they are watching. TV groups fear losing their longstanding control over pricing or user interface design, with their channel brands submerged behind a list of programmes and Apple acting as gatekeeper.

Netflix said at its own press event in Hollywood on Monday that it would not be joining Apple’s new platform. “We want to have people watch our content on our service,” Reed Hastings, Netflix chief executive, told reporters, Bloomberg reported.

For smaller companies such as Viacom and CBS, this is an easier decision. Viacom is not trying to build its own streaming service and is making good money by selling shows to tech companies, such as a reboot of MTV’s Real World reality show for Facebook.

The decision is more complicated for AT&T and Disney, who have made mega acquisitions to build their content libraries and take on Netflix. “There will be some content that [THEY]decide is probably best to keep,” said one person familiar with AT&T’s strategy. “The calculus is different now.”

Disney is gearing up to reveal plans for its own streaming service just two weeks after Apple’s event. The media group has been outspoken about its plans, with chief executive Bob Iger dropping details during earnings calls through the past year.

By contrast, Apple has provided little information about the March 25 event, even to the studios whose shows will appear as part of its new video bundle. After waiting so long for the big unveiling, many in the television business still feel Apple has a lot to prove.

“They haven’t illustrated a strategy,” said one TV network executive. “It’s Apple, but at the same time there are other places to go.”

This story has been updated since publication to include comments from Reed Hastings, Netflix chief executive. – Copyright The Financial Times Limited 2019