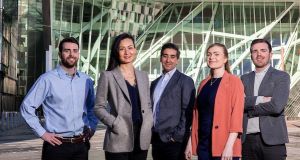 Five Irish start-ups focused on everything from micro-donations and data extraction, to transportation, sports analytics and ear surgery, are to fight it out in a competition to find the most scalable business idea in the Republic.

The finalists of the One2Watch competition will be given the opportunity to pitch their idea to 1,200 attendees at the forthcoming FutureScope conference in Dublin. The winner will get office space at the Guinness Enterprise Centre in Dublin, a place on Dublin BIC’s “Investor Ready” programme, free legal consultancy services, and €2,500 in prize money.

They will now have to persuade a panel of judges of the need for their particular product or service before a live audience.

Output Sports, which is officially launching later this year, is developing wearable technologies for sports coaches and athletes to optimise their performance.

Tympany Medical, which is also based in Galway, is a medtech company looking to revolutionise ear surgery with its device by improving outcomes, reducing unnecessary mastoidectomies, and minimising the requirement for extensive clinician retraining.

FutureScope, which promotes collaboration between entrepreneurs and large enterprises, is taking place at the Convention Centre on March 28th. This year’s event will cover topics including AI, data analytics, AR/VR, IoT, robotics , sportstech, fintech and 5G.