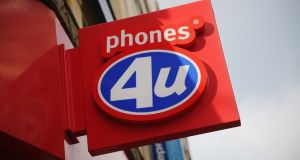 Irish telecoms executive Ronan Dunne, the former chief executive of O2 UK, has emerged as a central figure in a UK lawsuit that alleges senior industry figures colluded to force the British phones retailer Phones 4U out of business.

In the High Court case taken by  a company adminstrator, Paul Copley, who has the power to investigate the circumstances of Phones 4U's collapse, it is alleged that senior mobile network executives made a secret pact to pull their phones from the retailer.

Soon afterwards, in September 2014, Phones 4U, which had sales of £1.2 billion, went bust. This left Carphone Warehouse as the only real rival to the operators’ own retail networks.

The filings allege that Dublin-born accountant Mr Dunne held meetings with senior Phones 4U executives, at which he revealed details of the alleged pact.

In October 2013, Mr Dunne is alleged to have told Phones 4U’s top management that O2 had suddenly decided to pull its phones from the retailer, which Phones 4 U said did not “make any commercial sense”.

At a further meeting in January 2014, Phones 4 U chief executive Tim Whiting pushed the Irishman to provide “further or better reasons” for the decision.

It is alleged Mr Dunne told him the move was part of a deal between O2’s parent group, Telefonica, and Vodafone.

“Mr Dunne said that . . . O2 could not extend the agreement because to do so would breach ‘commitments’ that Cesar Alierta Izuel, the executive chairman and chief executive of Telefónica, had given to Vittorio Colao, the [then] chief executive of Vodafone Group,” the lawsuit alleges.

The lawsuit alleges that Mr Dunne told Mr Whiting the same commitments were given by Eva Castillo Sanz, the chairwoman of Telefónica Europe, to Philipp Humm, regional chief of Vodafone European division.

It is further alleged that Mr Dunne made comments that suggested he, or somebody on his behalf, had approached the chief executive of mobile operator EE to ask about its intentions. Olaf Swantee, the EE chief, allegedly later confirmed this.

The Phones 4U chief wrote a contemporaneous note to his chief legal officer: “During my meeting with Ronan on 27th January I witnessed some concerning potential anti-competitive behaviour.”

The note details the allegations and goes on to say that “I believe this behaviour to be inappropriate but do not think we should do anything at this time at risk of damaging network relationships”.

Vodafone and EE later both also decided to end their Phones 4U contracts. They are also named as defendants in the case alongside Telefónica and the former owners of EE, Deutsche Telekom and Orange.

Last night, PwC declined to comment on the case, which was first revealed by The Sunday Telegraph newspaper in the UK. Mr Dunne, who now runs mobile operations for Verizon in the US, could not be reached for comment.

Telefónica UK, which said it was also speaking for its former chief executive Mr Dunne, said: “We and Mr Dunne refute all of the allegations made against us and will strongly defend our position.”

Vodafone and EE also denied any wrongdoing and said they were confident they would win the case and their costs would be paid by the administrators.