Early-stage tech investor sees income rise to €5.9m on back of exits and other sources 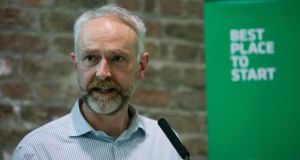 NDRC chief executive Ben Hurley: he said that even with near full employment in the Republic there were still plenty of wannabe entrepreneurs establishing their own businesses

The market capitalisation of the organisation’s portfolio companies is now worth a record €600 million, up 25 per cent from the €486 million reported in 2017, its annual report shows.

NDRC, which is based in the Digital Hub in Dublin’s Liberties area, was established in 2007 as the National Digital Research Centre by a group of Irish third-level institutions. Over the last decade it has invested in 286 start-ups, with alumni including highly-respected start-ups such as Artomatix, Boxever, iCabbi, Nuritas, SilverCloud Health and LearnUpon.

The organisation backed 32 new start-ups last year, with companies across its portfolio receiving more than €50 million in private investment and funding.

The organisation said that 16 portfolio companies raised more than €500,000, while nine others secured over €1 million. Among those to announce significant fundraises was Nuritas, the biotech company founded by Nora Khaldi, which raised €30 million from the European Investment Bank.

State-backed NDRC announced total income of €5.96 million last year, up from €4.72 million a year earlier even as the amount it receives from the exchequer fell to €3.9 million from €4.7 million.

NDRC said it made more than €1 million from selling out stakes in client companies last year. This came primarily from its investments in Senddr Software, Soundwave Analytics and Coonagour, the parent of iCabbi, which it exited in June 2018 after a subsidiary of French car maker Renault took a 75 per cent stake in the start-up.

The agency also doubled the income it receives from other resources to €1 million, due primarily to the running of an early-stage accelerator programme in Oman.

NDRC also runs two regional accelerators on behalf of Enterprise Ireland at PorterShed in Galway and ArcLabs in Waterford. Overall the organisation has worked with more than 500 entrepreneurs through its various programmes since it was founded.

More than 500 would-be entrepreneurs applied to be on one of its four accelerator programmes in 2018.

The organisation early this year tweaked its funding strategy so that it can invest larger sums and resources in companies it backs as it looks to address a widening funding gap for entrepreneurs who come through its various programmes.

“We’ve been investing for over a decade now, and it has taken that 10 years to get to a point where we have helped build a sustainable pipeline of scalable Irish business,” said chief executive Ben Hurley.

The annual report shows more than 1,000 jobs have been created by NDRC-backed companies to date, with one-quarter of those based outside of the State.

Mr Hurley said that even with near full employment in the Republic there were still plenty of wannabe entrepreneurs establishing their own businesses.

“We want to keep the potential flowing even at full employment because over the long-term this is about economic resilience and making sure we have capability within the economy to keep building for the future.”