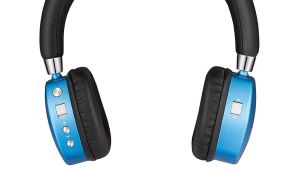 They never really seem to last all that long. There are too many weak points: either the band breaks through vigorous handling, or the ear cup is snapped off or the wires eventually suffer under the strain and break.

So when the Puro Sound Labs PuroQuiet ANC headphones land on my desk, I’m curious. Well, curious and a little aghast. Not only are they wireless, which pushes up the price, but the ANC stands for Active Noise Cancelling, and that means more expensive than your average kids’ headphones. They’ll set you back £70 from Amazon, which is more than double the cost of the most expensive set of headphones I’ve bought for my almost five year old.

It’s not an easy figure to get your head around, but what do you actually get for your money?

The PuroQuiet headphones offer two advantages over the standard wired ones. Cutting out that wired connection means there is one fewer item to break on the headphones, and it also means it’s less likely that your child will get tangled up in the wire in the car or on the plane. It may seem like a minor thing, but the struggle is real.

Second, the active noise cancelling can come in quite handy. Usually when I’m recommending noise-cancelling headphones, it’s to block out the background noise. And to be honest, about 60 per cent of that noise is usually caused by children – mine and other people’s. So the idea of noise-cancelling headphones for the noise-makers in my house is a bit of a turnaround. Having active noise cancellation drops out the background noise significantly, as you would expect. It’s necessary too. Like all children’s headphones should be, the PuroQuiet are volume limited to help protect your child’s ears. That 85dB limit means the noise cancelling is pretty essential if you don’t want to hear “I can’t hear it” every 10 minutes.

The headband is well-cushioned, and to help out their young target market get the headphones on correctly, there’s a large L and R on the inside of each ear cup.

On the left-ear cup, there is the bluetooth multifunction button, the power slider and volume controls. It also has the small micro USB charging port.

The right cup has the active noise-cancelling controls, a simple sliding switch. On the bottom of the ear cup is the port for the 3.5mm cable. The ear cups swivel to allow the headphones to be stored in the included storage case.

In terms of size, I can fit them over my head, although it’s a tight fit for the ear cups. But these aren’t really aimed at me, so I hand them over to the target market to get her opinion. They’re an instant hit. Even though there’s nothing playing on the headphones, she insists on wearing them in the car and shouting “WHAT? I CAN’T HEAR YOU!” every few minutes. The active noise-cancelling is switched on, but it’s not THAT good, so I suspect she might be having a bit of a laugh at my expense.

Still, they keep her busy for the car journey, and with no cable to get tangled up in, it’s easier for her to move around once the car stops.

Comfortable, volume-limited and sturdy: the PuroQuiet is everything you need from a set of children’s headphones. Plus they come with their own carry case.

There’s a decent battery but remember to turn off the ANC even when you think it is turned off. The price may be too much for some, but add up the cost of the cheaper headphones you’ve bought and discarded over the years and you may be surprised.

The active noise cancelling not only blocks out the background noise but it also improves the audio. Everything sounds a little bit better with the ANC turned on. The headphones will also act as a headset for your phone calls, with passable audio.

They may seem expensive but the PuroQuiet headphones are worth the money.