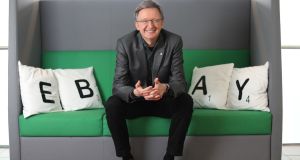 “Our CEO says we are the good guys.” Ebay’s Derek Allgood is happy with his move to the auction website. “We’re not undermining other high-street businesses, we’re not in competition, we don’t have products that we’re selling alongside our sellers’. Part of our ethos, and honestly, part of the reason that I wanted to be part of eBay, is what we do from a value perspective for buyers and sellers. That’s what we’re doing here in Ireland as well.”

When eBay opened its Irish website, the first item sold was four vouchers for Edenderry golf club for €102.50. That was in 2005, when the iPod was the most popular item sold on eBay, along with Nokia phones. Fast forward a few years and Windows 10 devices have taken the top spot, alongside bluetooth headphones.

The Irish site was launched with a blaze of publicity and a celebrity bungee jump over the Liffey for charity, promising to change how Irish shoppers bought things online. A few days later, the tone of some coverage had changed, with some reports describing the launch as a damp squib, with eBay’s Irish site full of listings for kitsch and tat.

Things have certainly changed over the years. In 2018, a total of 3.7 million listings on the site were from Irish professional sellers, with 68 per cent of those using eBay as a way of exporting their goods.

In March, the company announced it would launch its retail expansion programme in Ireland, a scheme that is aimed at supporting small and medium-sized businesses, offering eBay as a platform to help them to reach domestic and global audiences. Enterprise Ireland and the Design & Crafts Council of Ireland are on board.

Allgood joined eBay in 2017, taking up the role of vice-president of international customer experience. That means that your experience on eBay – good or bad – rests with his team. If something goes wrong, they are the ones tasked with solving it.

With a platform such as eBay, there is probably scope for introducing biometrics to protect accounts, but in a way that it doesn’t interfere with the customer experience.

“I think anything going forward is going to be based on some form of biometric when it comes to authentication, because everything’s online, even multiple government services and things like that are moving online in certain countries, particularly in Asia, ” he says. “It’s secure. The technology is such now that it’s amazing in terms of where we are, particularly with voice technology and face recognition.”

Allgood has previous experience with this. In his previous role with Citibank, the company launched voice technology that was essentially based on free speech. “You basically ring up and say, ‘Hi, Citibank, I made a deposit, I don’t see it reflected’ and as you speak, the technology would match that against a voiceprint that we had. When I left, we had about seven million voiceprints.”

That was useful in weeding out fraud, even low-level incidents.

Biometrics in eBay may come to the fore more in the coming years as the company expands its new payments option for customers. Back in 2003, eBay made PayPal the platform’s main payments provider. It was a move that made sense at the time, with eBay acquiring PayPal in a $1.5 billion deal. But in 2015, the two companies split into separate public companies, and signed a five-year deal. That agreement ends next year, and eBay has already made moves that would see PayPal become just another payments provider on the auction site, but no longer have the same prominence that it once enjoyed.

Last year, eBay began managing payments on its platform, a feature it will expand this year to Germany. That means eBay will cover the end-to-end buying experience, although it will be partnering with a company to do it. In theory, that means smoother transactions for buyers and sellers.

“We chose Germany, not because it’s the easiest international market to go to but the opposite, really, it’s quite complex,” he says. A third market has not yet been identified, but Allgood says the plan is to launch over the course of the next couple of years.

Because of that, Allgood says, the company has to re-examine how it performs authentication and how it audits itself internally.

“It’s a balance, right? You want to be as frictionless as you can be, but also secure. One of the things we’re talking about is a two-factor authentication, where it is something you know, and something you are – voice, biometric. I think that’s probably close to where we will end.

“We already do nuance-enabled interactive voice response. So you can ring in, tell us what you need, and we’ll try to get answers for you with our self-service. And we can easily put a layer of voice bio on that. So I suspect that’s what we’ll do.”

When eBay initially launched, its biggest competition was probably classified ads. These days, the digital competitors have grown. Facebook has its marketplace, and in each of eBay’s markets there are online marketplaces competing for listings.

How eBay differentiates itself is in its platform. Feedback can be left only if a customer has bought something, eliminating some of the problems that other platforms have had with fake reviews. Auction sniping, where software is used to swoop in at the last minute to win an item, has been clamped down on.

The quickest way to get banned from eBay? “Be dishonest, try to sell something that’s counterfeit or stolen. We have all kinds of technology and policy that’s looking out for those sorts of things,” says Allgood. “We have the right technology in place and the right mechanisms for people to report that sort of thing. We have entire groups who are just aimed at preventing fraud, as soon as we see something fraudulent are coming up, making it easy for people who have a patent, or items to report those things to us. We act as swiftly as we identify those. But it’s part of the business.”

The march of consumerism has hit a bump in the road though, with the current awakening that amassing so much stuff is bad for us and our environment. There is an argument that some of the things that are being sold on eBay, since they are pre-owned, may fit with the trend towards recycling and so-called upcycling.

“Generationally, it’s quite important, I think to Gen Z especially and to millennials to some degree as well, that we are smart about what we do with the environment, we’re smart about how we use products” says Allgood. “You have high-end and maybe expensive purses, We have a certification programme. I was in Tokyo a couple of weeks ago and one of the big businesses there are reselling these very expensive purses and leather goods that are precertified, but they’re basically recycled luxury goods.”

Before he went to work for eBay, he was also a fan of the platform, usually buying vinyl or hard-to-find items such as Star Wars merchandise or books. “The most significant thing to me was books, antiquarian books, signed books, first editions. I like that sort of thing.”

The company has changed over the years. Artificial intelligence has become a more important part of the platform, aiming to create a frictionless experience and a personalised one that makes it easy to come back and buy again. “The technology is changing every six months, what you can do with it, it’s a big part of our future.”

Meanwhile, eBay is still expanding in terms of its business and its employees in Ireland, employing between 150 and 160 people working from home. The plan is to increase that to a few hundred in the coming years. It doesn’t publish exact jobs figures but Allgood said there are “hundreds and hundreds” of staff at the Irish operations.

The previously-mentioned retail expansion programme has been a success for eBay, starting in Ohio and moving to the UK. The programme was then brought to Ireland, with its “wolfhounds” working with sellers to get the most out of the scheme.

“The idea was that we go to areas where there was the most need, build up high-street sellers. We’ve created jobs as well remote working in some of these locations,” he says. “I’d never lived in Ireland before but I want to be part of Ireland, I want to do good for Ireland while we’re here.”

So for eBay in Ireland, the future looks positive. The company is growing, and it is trying to hook in even more sellers to appeal to a global audience.

“We have great sellers in Ireland, we have a unique selling proposition. The Irish may have populated the world, but Irish products still have great opportunity to get over the world,” he says.

“We’re going to get smarter, for Ireland specifically we’re going to grow. It’s quite cool because again, as a foreigner here, Ireland small enough that you can do so much, and you can support so many unique businesses, you can create jobs. I’m really geeked about this. It’s not a it’s not a PR thing. It’s something that you can see and feel and touch and it matters.”