‘Nothing will beat the feeling of getting those first customers’ 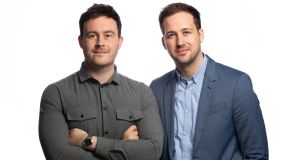 James and Timothy McElroy of HouseMyDog: ‘We broke the crowdfunding record in Ireland by raising £200,000 in just 48 hours.’ Photograph: Richie Stokes

After encountering difficulty finding a reliable dog-sitter and walker for their family dog, James and Timothy McElroy set about creating a company which would solve their problem. In 2015, HouseMyDog was born after the pair witnessed the success of other marketplaces like Airbnb and saw the opportunity to connect dog owners with professional pet sitters.

In the four years since its foundation, the company has grown its network to more than 350,000 users and has even been on the acquisition trail.

James and Timothy, meanwhile, have a complementary set of experiences that have allowed their company to grow. Timothy worked in corporate finance and subsequently at Berlin seed fund Catagonia Capital while James worked as a tech consultant to Irish small and medium businesses.

Today, HouseMyDog is active across 70 cities in eight countries and employs 19 staff with plans to grow to 27 by next year. In a market worth $6 billion, the ambitious duo hope that HouseMyDog will account for at least 5 per cent of the total market spend by 2022. With a solid funding base, it appears that James and Timothy are ready to capitalise on the market’s growth.

Each month, HouseMyDog connects thousands of dog owners with dog boarding, dog sitting, doggy daycare and dog-walking professionals who will care for their pet like a member of the family, providing one-on-one care and attention. HouseMyDog then takes a commission on bookings made through the platform for these four services. All bookings come with vet cover and 24/7 support.

To achieve our mission to become Europe’s largest pet services platform, we’ve used a combination of organic growth and strategic M&A. In 2017, HouseMyDog acquired competitor Schnuff&Co, providing a platform to expand into the German market.

When we first had the idea to launch HouseMyDog, we were confident we had an idea that pet owners wanted. We used our own savings for initial research and to run test ad campaigns but we didn’t have enough funds to launch the business. We were fortunate at that time to receive a €15,000 grant from DLR LEO which allowed us to build the initial beta version of the site and get our first customers. There have been a lot of ups and downs since then but nothing will beat the feeling of getting those first customers at a time when HouseMyDog was little more than an idea.

By the end of 2017, HouseMyDog was growing rapidly in Ireland and the UK and we knew it was time to take on some funding to support this growth. We decided to launch a crowdfunding campaign on Crowdcube. com and the reaction was fantastic. We broke the crowdfunding record in Ireland by raising £200,000 in just 48 hours and, within five days, the campaign had raised over £650,000. HouseMyDog went on to win Crowdcube’s ‘best crowdfunded business of the year’ and acquired the capital to accelerate growth throughout the UK and Germany.

Over 75 per cent of all revenue currently comes from markets outside Ireland now as we have seen rapid expansion in Europe. Ireland will always be our home market where it all began and we still see great growth here, especially in Dublin. To become a global player, you have to compete in the big European cities too. We don’t plan to stop at Europe but, for now, its keeping us busy.