Losses narrowed at Datahug prior to CallidusCloud acquisition 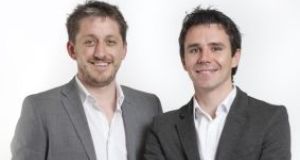 Datahug, the Dublin-based sales forecasting firm that was bought by CallidusCloud in a $13 million deal last month, saw losses narrow in the year before it was acquired, according to recently filed accounts.

The company, which was founded by Connor Murphy and Ray Smith and launched at the Web Summit in 2010, where it won the Spark of Genius start-up competition, incurred a loss before tax of €1.73 million last year, as against a €1.79 million loss a year earlier.

Datahug was acquired by CallidusCloud early last month and will now form part of the US software firm’s predictive analytics, AI and machine learning innovation centre.

The cloud-computing company was founded to help firms drive sales and business development by allowing the business to identify and tap into previously unknown business relationships. It counts Nitro, Instructure, G2 Crowd, McCann Fitzgerald and Scottish Equity Partners among its customers.

According to the company’s accounts, it employed 11 people locally last year with staff costs, including directors’ remuneration, totalling €975,023, down from €1.06 million a year earlier.