Look, no hands – or legislation: Audi A8 ahead of its time 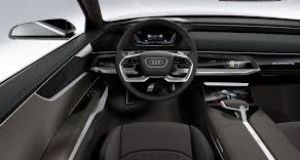 The interior of a prototype of the new Audi A8: the new car will offer the latest advances in self-driving technology but it will not be able to be used by drivers until the legislation is changed

If last week was all about an upcoming surge in electric cars, the motoring world moves on this week to the other revolution disrupting its industry: self-driving vehicles.

The focus last week was on Volvo’s decision to only offer new models with either electric or hybrid power from 2019. On Tuesday German premium rival Audi unveils its latest A8 flagship model, showcasing the latest stage in autonomous driving.

Yet, in reality, no customer in Europe will be able to use the system for at least six months as our legislation is failing to keep pace with the advances in autonomous vehicles.

The move towards fully autonomous cars is divided into five stages. Level one is billed as “no feet”, where acceleration and braking is carried out by adaptive cruise control systems fitted to many modern family cars.

At level two, some degree of steering control is also taken over by the car. This ranges from lane-keeping systems offered in many new cars today, through to more advanced versions featured on premium models.

These control the car’s steering and even overtaking functions. However, as the driver must remain in contact with the steering wheel and always theoretically in control, these systems have arguably proved to be more of a gimmick than a useful feature.

With its new A8, Audi moves to level three autonomy. This is a major leap forward and has been described as “no feet, hands or eyes”. In certain circumstances the driver will take no active involvement in the control of the car. However, like the previous level, the driver should be ready to intervene.

There has been a lot of debate within the industry about introducing level three systems on the market, with, for example, Ford’s former chief technical officer Raj Nair saying he fears drivers will be too distracted to re-engage and take back control quickly enough in an emergency.

Firms like Ford are aiming instead to move straight to level four, where the car is fully in control and manufacturers take full responsibility if something goes wrong. The driver will only take control when, for example, the route involves an unmapped back road.

The advent of autonomous vehicles raises a multitude of issues for motorists, road traffic laws and the insurance sector. Our legislation is built around the principle that the driver must ultimately be in control of the vehicle. Clearly we need to review our road traffic legislation urgently.

Regulators need to more actively engage in all aspects of the motoring revolution that’s underway, and not just the strand that involves installing more plug sockets in car parks.