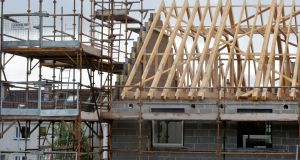 The new application fee will range from €65 to €130 per unit, resulting in a maximum fee of €80,000, more than double the current maximum of €38,000 a local authority can charge. Photograph: Alan Betson

A significant plank of the Government’s housing strategy came into being on Friday, namely the fast-tracking of decision-making for large-scale housing schemes.

The new law, which passed through all stages of the legislative process in December, has taken over six months to be enacted as officials pondered the application fee developers will be forced to pay An Bord Pleanála for each application.

Such a delay is hardly ideal in the current climate of acute housing shortages and ballooning demand and developers may have held off applying or progressing their schemes during the six-month hiatus.

Instead of having to apply to local authorities, whose decisions can then be appealed to An Bord Pleanála, developers can now makes applications for schemes with more than 100 homes or blocks containing 200 student bed spaces directly to the board.

The board will be required to hold pre-application consultations with developers and the relevant local authority for a maximum period of nine weeks, prior to the submission of an application.

An Bord Pleanála will then have up to 16 weeks to decide whether to grant permission, during which time submissions from the local authorities or the public can be made.

The new fee will range from €65 to €130 per unit, resulting in a maximum fee of €80,000, which is more than double the current maximum of €38,000 a local authority can charge, which raises wider questions about how the planning system is resourced and funded.

Developers for all sorts of projects have reported delays in accessing pre-planning meetings with local authorities.

According to the Irish Planning Institute, the number of planners in local authorities fell by a third between 2006 and 2015.

“Unless much of the new fee goes to resource local planning departments, the now mandatory pre-application process involving An Bord Pleanála and the local authority may mean other applicants may find it even more difficult to get a meeting,” it said.

The institute considers the measure another damaging erosion of local authority power; conversely the Government deems a necessary expedience in the face of a worsening housing crisis.