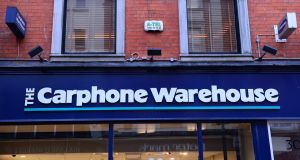 As an acronym, MVNO (mobile virtual network operator) is a mouthful. As a business model in the Irish mobile market, it is also a hard slog.

MVNO deals – where fresh competition is injected into the mobile market by a new entrant reselling the capacity of an existing operator – are now surely yesterday’s news.

Last week, it emerged that Dixon Carphone’s iD Mobile, an MVNO that piggybacks on Three Ireland’s network, is to be “most likely” sold off. But only if a buyer can be found. If not, presumably it will be simply shut down.

The annual losses at iD are about twice its revenues. Dixons Carphone is also keeping the iD Mobile brand in the UK, so presumably anyone who buys the Irish unit won’t even get access to the brand for long.

Between 20,000 and 30,000 customers signed up to iD since its launch less than two years ago. That’s a paltry return for a new operator backed by a listed UK communications giant.

As a customer book, the value is negligible.

So what is there left to sell?

The main asset of iD is its MVNO agreement with Three. This is a guaranteed capacity contract, issued by Three as one of the two MVNOs it was obliged to facilitate to get its acquisition of O2 Ireland past European competition regulators.

Unless an MVNO operator can get huge numbers of people to switch over, it will always be a risky model. Dixons Carphone couldn’t crack it. Who else will be brave enough to try?

As a competition remedy, the MVNO approach has been an utter failure in the Irish market – iD has hit a wall, while the other MVNO that arose from the Three-O2 deal, Virgin, has also failed to make an impact. Post Mobile and Lyca Mobile are also tiny.

MVNOs account for just 6 per cent of the market, which is locked down by the big three – Vodafone, Three and Meteor.

Two-thirds of that measly MVNO slice is Tesco Mobile (where the retailer is buying out Three’s 50 per cent).

What is the point of the existence of the others?