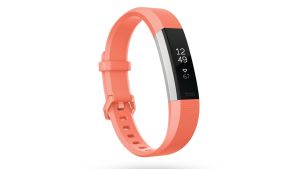 The Alta HR in a classic coral band.

Where to buy: fitbit.com

The activity tracker market may be heaving with different options at the moment, but Fitbit is probably one of the more well-known brands. It is certainly capitalising on that; the company has a range of trackers covering everything from the budget option that tracks movement to smartwatches that link up with your smartphone.

Where does the Alta sit? Sort of in the middle. Its primary function is tracking your movement and sleep, but it has limited functions for your phone. You can get notifications of calls, texts and calendar events on your wrist; it’s the essentials, and it’s not overwhelming.

The Alta HR is the second version of this particular tracker that Fitbit has brought to the market. When the company introduced the original version it was pitched as the more fashionable activity tracker in the range. It’s still slim - not too chunky, not flimsy, but just the right balance between the two. The tracker still manages to pack a bit in – automatic sleep and exercise tracking, a touch sensitive display, silent alarms and a prod to get you up and moving regularly.

The new version, however, address a few of the issues with the first version. The strap has been redesigned, adding in a buckle that makes it feel a lot more secure on your wrist than the previous version. The screen also seems more responsive to taps, which you use to cycle through the various information on the band; the previous version was problematic, at least in our experience.

The biggest change, however, is the new heart rate monitor that Fitbit has added, hence the name. It uses PurePulse, which measures your heart rate using light sensors and the blood flow in your wrist. It measures it constantly, and while it’s not medical-grade equipment, it seems to be in line with other fitness trackers – for example, the Apple Watch.

That technology also comes into play with the sleep tracking. The update Alta uses Fitbit’s Sleep Stages technology, which is designed to be more accurate and uses your heart rate to help keep tabs on your movement between light, deep and REM sleep.

You’ll need the app to track all this info, of course. It works on both iOS and Android, connecting through Bluetooth and syncing in the background at regular intervals. The app on your smartphone lets you see how many steps you’ve taken, your active minutes – 10 minutes or more of moderate activity – and your calorie burn, plus time you spent in each sleep stage and how much time you were awake during the night, in a nice colour coded chart.

The question is: do we need to know all this? For some people, the answer is yes. Yes, you want to know how many steps you’ve taken, how good your sleep quality is, what your heart rate is on a daily basis. The rest of us might keep an eye on it for a month or two before the tracker starts gathering dust in the back of a drawer. For the former group, the Fitbit Alta is a good way to track all that.

It can be a bit mystifying if you enable too many alert options. It buzzes to get you to move at regular intervals, if you get a call or text, or a calendar notification, with a display alert too. The problem is distinguishing between them if you don’t get to the notification right away. I’m still none the wiser about the cause of several vibrate alerts while testing the Alta HR, because they cleared before I saw the screen. Do yourself a favour: keep it simple when you’re setting it up and stick to essentials only.

The heart rate monitor seems fairly accurate, keeping close to the Apple Watch’s monitoring. However, it’s worth noting that none of these devices are medical grade, so there may be some variance. The battery lasts several days before it needs charging too, which means you aren’t chained to your cables – close to the seven days that Fitbit claims.

Speaking of charging, we still have a proprietary charger to deal with. That means losing it will be inconvenient and expensive, as you can’t just swap it out for another cable by raiding your stash of old phone cables. The Alta HR isn’t waterproof. Sure, it’s splashproof, which means it will stand up to a bit of rain and sweat, but it rules out swimming. It might seem like a minor thing but there’s an argument in favour of making all fitness wearables waterproof, because it’s more convenient and it just makes sense.

If you are interested in finding out how well you sleep, the Sleep Stages technology that Fitbit has included will help shed some light on the matter.

The Alta also has interchangeable bands, so can buy sizes bigger and smaller, or swap it for something a bit more exciting than the standard silicon bands the device ships with.

A much improved Alta, although it would be better if it was waterproof.