Broadband delay predicated on fears of another Moriarty 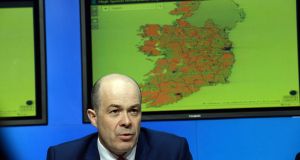 Denis Naughten: Doesn’t expect the first homes to be connected until at least 2019. Photograph: Cyril Byrne

Fresh doubts have emerged about the delivery of the National Broadband Plan (NBP) following another apparent shift in the Government’s timeline for delivery.

Minister for Communications Denis Naughten last week indicated he doesn’t expect the first homes to be connected until at least 2019, a year later than previously flagged and five years since the project was first mooted by the then communications minister Pat Rabbitte.

This is because the department, rather mysteriously, seems to want to wait for Eir, a privately owned telecoms business, to complete a separate project involving 300,000 rural homes and businesses, which is being done on a commercial basis.

The 300,000 were once part of the Government’s scheme but were taken out at the last minute, a move that angered the other two bidders in the process – Siro and Enet – as the premises were viewed as the quasi-commercial end of the project. Ultimately it all means that some of the homes earmarked for the Government’s plan may have to wait until 2023 or 2024 to see any progress.

The hold-up can be put down to two things: the complexity of the procurement process, which has been launched several times, has involved countless stages and dialogue meetings and a veritable tsunami of legal documentation; and on the department’s failure to nail down the intervention map sooner.

Eir’s decision to go ahead connecting premises already included in the State plan left the Government open to a challenge under EU state aid rules, which specify that the State can only intervene in areas where commercial businesses won’t go.

The cautious approach is unquestionably predicated on a desire to avoid a “Moriarty Two” scenario with the award of another large telecoms asset becoming mired in legal dispute and political controversy.

The Government also doesn’t want to be seen to be giving away another state asset to a private operator, which goes on to generate big profits while the woebegone taxpayer looks on.

All very understandable objectives, but we’re now five years since this plan was first announced and we’re still another two years off commencement – not exactly high speed.