From disrupter to disrupted: Apple’s profits overtaken by Samsung 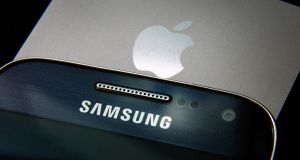 It seems the disrupters have become the disrupted with Samsung set to overtake Apple in terms of profits for the first time since the two became the smartphone market’s biggest players.

Its American rival is projected to post operating income of €8.8 billion in the same quarter – admittedly a typically weaker period ahead of the release of new iPhones.

This is significant for Samsung given the problems they have had with Galaxy Note phones reportedly catching fire. Perhaps more telling, however, its its significance in terms of Apple, which has long been the go-to company for fashionable tech hardware.

To make matters worse, Apple is even contributing to the success of its competitor. Samsung’s most profitable division actually sells parts – including screens and memory chips – to other companies, including Apple. Samsung is reported to be the only supplier of the new next-generation OLED screen that will be a key selling point of the iPhone 8.

While we all get excited by each overhyped unveiling of Apple’s latest shiny toy, the firm’s core weakness these days appears to be with its ecosystem. Spotify is eating its iTunes business, while Amazon and its Audible division has beaten it for books. Netflix has taken its iMovies business.

Selling hardware is lucrative, but the constant revenue comes from monthly fees for software as a service, and this is where Amazon and others seem to be winning out.

Tech watchers might be advised to look past the glitz and the glamour of the latest hardware launches and instead focus on the lifeblood of any sustainable business model: constant and reliable streams of revenue. Apple needs to fend off the rivals eating into its core.