Cantillon: while Orkambi has been approved, nine other vital drugs are stalled in system 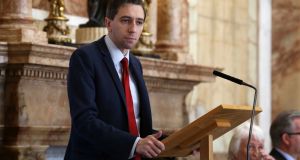 Minister for Health Simon Harris: due to budgetary constraints, many drugs are likely to be frozen out of the Irish market. Photograph: Sam Boal/Rollingnews.ie

The full cost of the Government decision to approve cystic fibrosis drug Orkambi is beginning to be felt by the health service and patients less than three months after it was approved.

The Government opted finally to approve the breakthrough medication in April after a concerted campaign from patients and interest groups, and intensive negotiations with the drug’s manufacturer over price.

The decision to approve Orkambi is particularly bittersweet for the Irish Pharmaceutical Healthcare Association (Ipha). It spends much of its time pressing the Government to grant access (and reimbursement) for new, innovative – and often very expensive – drugs developed by its members. The deal it struck with the Government only last year envisioned savings to the State of about €780 million over four years.

The understanding was that this would be spent on these new biologic therapies. However, Orkambi appears to have taken up about half of the likely savings and its manufacturer, Vertex Pharmaceuticals, is not a member of Ipha.

Meanwhile, nine drugs for a range of conditions, including cancers, depression and heart failure, are stalled in the system. The HSE says they should be available but there is no room in the health budget to pay for the €120 million they will cost over the next five years.

A further 14 drugs are working their way through the approvals process and will join that logjam in coming months.

Minister for Health Simon Harris’s Cabinet colleagues will certainly not thank him for highlighting the Government’s budgetary constraints by dragging each in turn through the political process. As a result, many are likely to be frozen out of the Irish market.

No one blames the 600 cystic fibrosis patients for doing all they can to secure the best treatment available. But the fallout highlights once again the deeply unsatisfactory position where the choice of which medicines are approved and which are not comes down to who shouts loudest and makes life most uncomfortable for the government of the day.

Ironically, the one stakeholder likely to be content with the process, if not the outcome, is the HSE itself. Having politicians make the decisions on which drugs recommended by the HSE are sanctioned for payment and which are not certainly removes some of the heat from the health service itself.