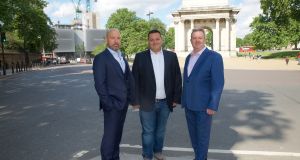 Owner Philip Dowds with Jamie Menzies and Corin Hawthorne of OKTO Technologies. The company says its specialist technology can “seamlessly control” a wide range of systems which then make it appear as if a property has a ‘virtual butler’

A Northern Ireland company that has developed “smart building technology” that can create a virtual butler in your home, has won contracts worth more than £10.5 million from developers in London who are creating the next wave of the capital’s ultra-luxury properties.

Lisburn-based OKTO Technologies will develop and deliver its smart-building technology, which can control all environmental and lifestyle requirements from heating to air-conditioning, security, lifts and even swimming pools, for a number of superprime developments under construction in the West End of London.

According OKTO, its specialist technology can “seamlessly control” a wide range of systems which then make it appear as if a property has a “virtual butler” that can think and act on behalf of its owners.

One of the new projects the company will be working on is the £500 million Peninsula Hotel and Residences development under construction in Belgravia.

OKTO will provide the lifestyle technology systems for the 25 new apartments and penthouses.

The Lisburn company has also won a contract to design and install home automation and AV technology at the Mayfair Park Residences, which is serviced and managed as part of the neighbouring Dorchester Hotel on Park Lane.

According to OKTO owner Philip Dowds, the latest contract wins in London are “highly significant” and mean the company is on track to reach its £70 million turnover target, and triple its workforce, by 2025.

“We now operate on a completely different level. Our team of experts in Northern Ireland have successfully harnessed Artificial Intelligence and developed building management systems which meet the needs of the world’s top property developers,” he said.