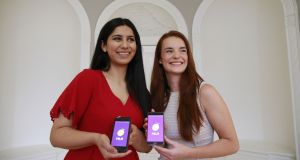 A carpooling app developed by University College Dublin (UCD) students has won a €3,000 prize having been declared overall winner of the 2019 UCD start-up stars programme.

MLN, pronounced melon, is developing a secure, real time carpooling app for medium to large organisations in an effort to reduce the number of cars on the road.

The student venture found that more than 50 per cent of employees of medium and large companies live outside a direct form of public transport to work.

The MLN app will allow users be either passengers or drivers for their daily commute. It uses GPS to detect a user’s commute and has a raft of additional features which can provide visibility over a person’s carbon footprint reduction and productivity increases.

Manal Mukhtar, a UCD undergraduate student and Ellen Le Bas, a UCD postgraduate student, are the two founders of the app. Ms Le Bas said the pair are “excited to continue working with NovaUCD to develop MLN further”.

Ms Mukhtar said: “We believe that we are at the cusp of a carpooling revolution and that MLN can be at the forefront when it reaches the tipping point”.

The UCD programme provides a framework for undergraduate and postgraduate students who want to work together to develop and grow start up companies. It has been developed by NovaUCD, the UCD Innovation Academy and the UCD Michael Smurfit Graduate Business School.

Some seven early stage ventures took part in an intensive mentoring programme over the past four weeks at NovaUCD with the aim of assisting the students to refine their start up ideas. In addition, each team also received a cash stipend and office space at NovaUCD.

MLN was selected as the overall winner of the programme, now in its fifth year, as it was considered to have the most commercial potential. The prize fund, which included €400 for each of the six runners up, was sponsored by Xilinx.

Some of the other competitors included a venture which plans to launch a scooter sharing service, one which wants to develop and build an electric race car for amateur drivers and a venture developing a mobile app to tackle medication non-adherence.