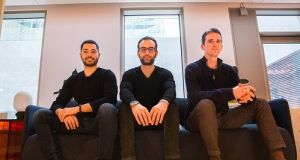 Other backers include Enterprise Ireland and Italian angel investor Gianni Matera, who has backed a large number of Irish tech start-ups in recent years through his investment firm, Growing Capital.

The company intends to use the funding primarily to hire additional staff with plans for a Series A round on the cards for late 2020.

“We’re out to disrupt the property valuation sector because it basically still operates the same way as it did in the 1800s. It consists of people running around to inspect houses and then producing reports based on what they’ve seen and some additional research they’ve pulled together,” said Mr van Bommel, Geowox’s chief operating officer.

“This is a completely data-driven process in which you need to know what properties are similar, how much they sold for and so on. With more and better quality open-source data freely available, linked with in-depth analysis and machine learning we can produce really accurate valuations,” he added.

Mr van Bommel, who previously served as Twitter’s head of new business for Europe, the Middle East and Africa, said its platform could help financial institutions and property companies to better manage their portfolios.

Mr O’Higgins, who has emerged as one of Geowox’s backers, was formerly managing director of DTZ Sherry FitzGerald before taking on the same role at WK Nowlan. He is in the process of leaving the company along with its founder Dr Bill Nowlan after directors John McNally and JP Hilliard bought him out.

Mr Matera, the other lead backer in the latest funding round, has invested in a spate of promising start-ups in recent years including Glofox, Flipdish, Cerebreon and Popertee.

The so-called super angel moved to Dublin from Milan in 2013 after exiting DigiTouch, a digital advertising company he founded in 2007. It subsequently floated on the Italian Stock Exchange in a €44 million initial public offering in 2016.

1 Aldi empire wracked by family feud
2 NatWest considers closing Ulster Bank in the Republic
3 Will PTSB be Ulster Bank’s knight in shining armour?
4 Cliff Taylor: What permanently low interest rates mean for you as a saver or borrower
5 TikTok to be banned from US app stores from Sunday
Real news has value SUBSCRIBE