Doogee S40 review: What happened when we dropped it down a stairs

Doogee S40 review: claim is this is almost indestructible but it failed at the first hurdle 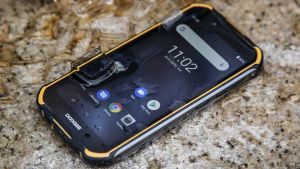 The specs say the Doogee S40 has been drop tested 20,000 times at 1.21 metres. It didn’t survive a fall even a fraction of that distance – the screen shattered on impact.

Where to buy: www.amazon.co.uk

“We could put it on the barbecue,” was a suggestion from one of my colleagues when we were trying to think of an effective but safe way to test the Doogee S40, an android phone that claims to be (and I’m quoting the press material here) “hard as nails”.

It can survive ice, water and fire, apparently. But could it survive me?

I wanted to like the Doogee S40. It’s difficult not to like a phone that promises to be almost indestructible, especially when many of the phones you spend a serious chunk of change on every two years or so suffer a shattered screen if you so much as glance at them sideways. The S40 is not a delicate flower; the press material showed the screen of the phone on fire, hence the suggestion that we chuck it on the barbecue. We didn’t quite get to that point for reasons that will become clear.

I had reasonably high hopes for the Doogee S40. Sadly, I was disappointed.

The S40 is not pretty, though few phones fitting into the “rugged” category are. The black rubberised casing looks like it could withstand a bit of abuse, with an orange accent in some sort of nod to style. Ports bury the charging port and headphone jack (yes, it still has one) a little deeper into the phone to protect them.

It also means that performing simple tasks, such as plugging in the charger or headphones, take a bit of dexterity and careful choice of cables; getting the sim card tray out was almost impossible without using some sort of tool (for the record, the edge of a card will do it).

That brings me to one fatal flaw with the Doogee S40: if you leave a port uncovered, it is no longer water resistant. At a time when an increasing number of phones offer water resistance without plugging up the holes, this feels like a backward step.

How you feel about the S40 depends on what you are comparing it to. At less than €100, it is not going to worry the higher end phones in any way. But with the bar for mid-range and budget phones being raised, the Doogee doesn’t really hold its own. The 5.5 inch screen looks okay, but not great. The viewing angle lets it down at times, and the visuals look muddy.

On the inside, things aren’t much better. It’s a quad core chip, but the Mediatek MT6739 chip verges on okay rather than outstanding.

The camera, if you are bothered, is an 8 megapixel rear camera and 5 megapixel front-facing camera, and it does just about as well as you’d expect. Fine in normal light, but stress it out in any way and you are looking at some substandard photos.

You can argue that the criticisms I’ve made – the poor screen, the water resistance, a sub-par camera, the sluggish specs – are all a sacrifice made in pursuit of a cheaper price. But that isn’t the only reason the S40 failed to make the grade.

Which brings me to that barbecue test we never got to. A couple of months ago, I tripped and fell at work. In an effort to save myself from any sort of injury, I dropped my phone to grab the handrail with both hands, and watched in horror as my phone disappeared down the gap in the side of the staircase, falling two flights of stairs before landing screen down on the concrete basement stairs. Aside from an almost unnoticeable scuff on the screen, the phone survived, thanks to the Mous Airoshock case that protected it.

The Doogee S40 didn’t survive a fall even a fraction of that distance; the screen shattered on impact. The specs say it has been drop tested 20,000 times at 1.21 metres. This fall was definitely higher than that – about double – but you would expect a “hard as nails” phone to perform better than a standard smartphone in a decent protective case. The press imagery shows the S40 under the tyre of what we presume is a car; sadly we didn’t get to test that one either – it had already failed at the first hurdle.

The screen itself did still work after it was shattered, so kudos to Doogee for that. But it was only a matter of time before the glass shards started working their way out of the cracks, and I quite like my fingers the way they are, thanks.

It’s not expensive. And provided you only drop it from 1.2 metres, it should survive.

Where to start? The screen isn’t great, and it shattered when I dropped it down our office stairs. Which might be fair enough but for the fact that non-rugged phones have survived a much higher fall. If you leave the ports open, your phone won’t be waterproof. Great if you know you are planning a dunk, but not so great if you accidentally drop your phone in the pool.

It’s dual sim, and although the capacity on it is a terrible 16GB, you can expand storage with a memory card, if you don’t mind giving up the second sim slot.

Skip the S40. Invest the money you save in a decent case for your existing phone instead; it will be a better investment.