Instashop: How Instagram wants to ‘connect the dots’ from users to retailers

Adam Mosseri outlines his ambitions for the Facebook-owned platform 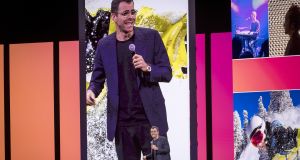 Adam Mosseri, the head of Instagram, has laid out his long-term vision to ramp up retail and tap the desire of the photo app’s 1 billion users to indulge in “window-shopping”.

In his first interview about Instagram’s business strategy since taking over last October, the 36-year-old former Facebook executive said he was aiming to “connect the dots thoughtfully” between shoppers, sellers and the app’s huge number of “influencers”.

He said that by introducing functions such as “native checkout”, where shoppers can buy goods on Instagram without leaving the app, and “shopping bags”, where they can hold items in a cart, “we can unlock a lot of value from everyone involved”.

Instagram has only recently started to test ways of allowing users to buy goods directly on its platform, after seeing demand from users, brands and popular influencers, who have large followings on the site.

Some balked when Facebook paid $1 billion for a 12-person loss-making and revenue-free Instagram in 2012, but the app has proven a huge hit among younger users and could now be worth $158 billlion (€139 billion), according to analysts at SunTrust Robinson Humphrey.

They estimate it will generate $15.8 billion in advertising revenues this year, almost a quarter of Facebook’s group total. Analysts at Deutsche Bank, meanwhile, believe that Instagram could make $10 billion in shopping revenues as early as 2021.

Mr Mosseri stressed that shopping was a long-term plan that would require significant infrastructure. Instagram needed to work with payments providers in each country, for example. Buyer-protection features and inventory systems management integration would also need to be introduced, he said.

“That world is hyper fragmented,” Mr Mosseri said. “So it’s a very, very long lead time. This isn’t a one year thing, this is like a five to 10-year project.”

But he sketched out a vision that would see Instagram move firmly into territory occupied by Amazon and Alibaba, or even the so-called “super apps”, such as China’s WeChat, that allow users to send money, shop and play games without having to leave their platforms.

New data and analytics around customer spending patterns “would give an indication of what sort of commercial activity or products individuals were interested in”, helping to target advertising, Mr Mosseri said.

He said that the group was also “very excited” about the prospects of taking “reasonable” commissions on transactions. “It should be very return-on-investment-positive for the sellers involved,” he added.

In March, Instagram said 20 US fashions brands, as well as influencers and creators working with those brands, would be able to sell directly on the platform through a partnership with PayPal. It has also started to invest in better business-to-consumer messaging.

Mr Mosseri said that while some shoppers knew exactly what they want to buy, others liked to browse online, a virtual version of “window-shopping”, perhaps having only “a specific genre like fashion or electronics” in mind.

“We think we can play in that space as well. And so we’re excited about some of the ideas there.”

Instagram’s allure for brands comes in part from its users being able to imagine themselves using the same products as the influencers they follow, or as their friends.

Mr Mosseri pointed to “commerce in Japan” as one of his major priorities for the year ahead, and said that the country, where Instagram will set up a 10-strong developer team this summer, was showing “momentum”.

In the meantime, Mr Mosseri said ensuring safety and wellbeing on the platform was his “number-one priority”. Tensions flared earlier this year following the suicide of British teenager Molly Russell, whose father said she viewed Instagram images of self-harm. UK politicians are now proposing holding tech platforms - and their senior managers - personally liable for user-generated content.

“[We’re] not only trying to identify acute issues and address them, but also think [about] the fundamentals of how Instagram works,” Mr Mosseri said.

He announced this year that the platform would test hiding the numbers of “likes” a post has received - a staple feature for users - to assess whether this would help ease social pressure.

Mr Mosseri said it was too early to judge the impact of the test, initiated among nine out of 10 people in Canada, but that he was “personally bullish” on the idea of rolling it out further. “I hope that we can make it work,” he added.

Separately, Mr Mosseri has been directed by Facebook chief executive Mark Zuckerberg this year to introduce more privacy features to the photo sharing app, part of a wider push to integrate the business more closely with its parent company.

The initiative comes as some politicians call for the companies to be prised apart on antitrust grounds, but it also poses a dilemma for the chief executive so focused on safety. “There’s a real tension between privacy and safety,” he said.

“We’re just reaching a scale now where the decisions we make have real effects on the rest of the [Facebook] family... That’s success in some ways. But it does complicate things,” he added.

1 Retailers accused of ‘stealing business’ from rivals by flouting restrictions
2 In praise of Gogglebox Ireland, an essential service in all but name
3 Outgoing Irish a sitting duck for Covid
4 Nama grants Ronan four-month extension on €160m glass bottle site deal
5 How long can Government afford to keep State pension age at 66?
Real news has value SUBSCRIBE