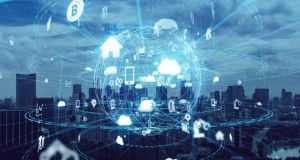 Vodafone Ireland has introduced a new app development platform allowing for the creation of Internet of Things (IoT) solutions. The move comes as the telecoms operator recently reported a sharp rise in adoption of IoT technologies in the Republic.

“The introduction of Invent extends our portfolio and will help democratise the IoT landscape by giving businesses connectivity, device, app development, insights, hosting and a fully managed service from one provider,” said Debbie Power, IoT country manager at Vodafone Ireland.

“This is a huge step forward in terms of business connectivity and represents a wider drive from Vodafone to remove the barriers to digitalisation and give businesses access to the latest technology,” she added.

Recent figures from Vodafone show a huge surge in connectivity for its IoT technology with some 375,000 global connections at the end of 2018, a rise of 35 per cent on the previous year. It said this performance had continued into this year with connections up between 15 to 20 per cent in the first few months of 2019.

Vodafone, which last year announced plans to give Irish businesses access to its global “IoT Express” network to allow them to develop and test new products and services, was the first telco to launch a commercial narrowband IoT network in the Republic.

1 Suspicions rife as key Brexit trade talks begin in Brussels
2 Life as a Facebook moderator: ‘People are awful. This is what my job has taught me’
3 Corona beer firm reeling after 8% slide due to coronavirus
4 ‘The only time apartments were viable was in . . . Ballsbridge, Killiney and Dalkey’
5 Irish companies restrict travel over coronavirus fears
Real news has value SUBSCRIBE