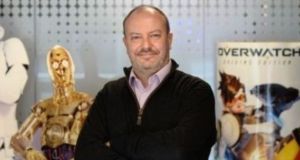 Dublin-headquartered but London-listed video game specialist Keywords Studios has acquired Cononut LIzard in a £2 million (€ 2.2 million) deal and advised of further acquisitions over the coming months.

Coconut Lizard generated revenues of over £1.5 million for the 12 months ending March 31st and adjusted earnings, interest, taxes, depreciation, and amortisation (ebitda) of £350,000. The business has added 10 developers to its team since January to take total employees to 29 with more expected to be added.

The deal is Keyword’s first acqusition since it successfully raised £100 million last month in a placing.

“We expect to complete further acquisitions over the months ahead from the strong and attractive pipeline of opportunities that we are currently reviewing,” said Keywords chief executive Andrew Day.

1 Can Grafton Street stop the flood of closures?
2 ‘My rent here is so low it’s a joke’
3 Belgium helps Ireland to a Brexit boon
4 Brussels proposes €5bn Brexit fund to break deadlock around Covid plan
5 FC Barcelona to pursue Nike for compensation over defective shirts
Real news has value SUBSCRIBE