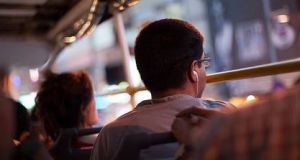 CitySwift will provide a tool for passengers that can help them decide when best to travel on buses. Photograph: Getty Images

Galway-headquartered CitySwift has rolled out new technology for one of Britain’s biggest public transport companies aimed at easing commuters’ fears about travelling during the coronavirus pandemic.

The move sees CitySwift working with the Go-Ahead Group to provide a tool for passengers that can help them decide when best to travel during a period in which social distancing restrictions mean less availability on buses.

The “When2Travel” tool, which Go-Ahead is rolling out across Britain, lets users know when buses have sufficient space on a stop-by-stop basis. This marks the first time that CitySwift, which provides data-driven scheduling and planning technology for public transport companies, has developed a customer-facing solution.

Founded in September 2016 by Brian O’Rourke and Alan Farrelly, CitySwift has just raised an additional €2 million from existing backers amid expectations that its technology will be in demand from public transport companies coping with the challenges arising from the Covid-19 crisis.

Speaking to The Irish Times, Mr O’Rourke and Mr Farrelly said the company had experienced a big jump in business in recent months as both new and existing clients seek to adapt post-Covid.

“Close to 90 per cent of passengers disappeared overnight, and they are very gradually coming back. But companies need the data to be able to manage this as patterns have changed. We saw the big surge in business and approached our investors to get extra investment so that we can accelerate growth and become market leaders in the UK,’ said Mr O’Rourke, CitySwift’s chief executive.

“This is a pivotal moment for public transport, with a once in a lifetime opportunity to look at different ways of providing it.”

CitySwift is also looking at expansion in continental Europe, with pilot programmes under way in Germany and Portugal and others to be announced shortly in Spain and France. It is also in talks with public transport providers locally.

“Selling business to government is extremely difficult so we have put all our resources into signing up PLCs, especially in the UK,” said Mr Farrelly, CitySwift’s chief operating officer. “The plan was to get the flagship clients there and then go beyond that.

“I’m hoping we’ll be operating in Ireland in the next 12 months, but we also have opportunities with existing clients that have a major presence elsewhere around the world.”

1 Why gift a son now if it eats into his tax-free inheritance threshold?
2 Chris Johns: Economic self-harm is the root of populism
3 Government to avoid ‘cliff-edge’ on Covid-19 payment changes
4 Flights abroad ban could last all summer
5 UK expected to phase Huawei out of 5G network
Real news has value SUBSCRIBE