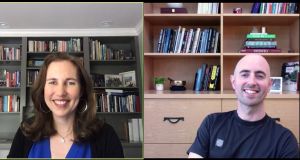 Irish-founded tech company Intercom has announced a new chief executive as it edges nearer to an initial public offering.

The company said Karen Peacock will succeed co-founder Eoghan McCabe, who is to become chairman.

The news comes as Intercom announced some recent big client wins, including Facebook and Amazon.

Ms Peacock, who joined the company as chief operating officer in 2017, has been key in helping Intercom expand beyond its core client base – typically early-adopter technology companies – towards having household names as customers.

A Dropbox board member, she was named among the “top 50 most powerful women in technology” by the National Diversity Council in the US last year. She previously spent eight years at financial software company Intuit, leading its small business products and services division.

During her tenure, the division’s revenues grew to $2.5 billion as Intuit’s market cap jumped from $7 billion to $40 billion.

“Karen is one of the strongest and most brilliant leaders in software...and she is a really unique operator,” said Mr McCabe. “CEOs must operate at tremendous scale, but she also has a background in mathematics and started out engineering software before climbing up the ranks in business. You don’t get a lot of great business leaders who are also nerds and product people.”

Founded in Dublin in 2011 by Mr McCabe, Des Traynor, Ciarán Lee and David Barrett, Intercom claims more than a billion end-users for its software platform, which brings messaging products for sales, marketing and customer support together.

Its products enable companies to communicate easily with customers through their own websites and apps, on social media and by email.

The company currently employs 600 people, of whom about 250 are in Dublin.

Ms Peacock said the company had increasingly been “slipping into the mainstream” over the past few years, with many of the world’s biggest brands becoming clients as they seek to respond better to customers online.

“This was already happening and the co-founders always envisaged it, but Covid-19 has massively accelerated the shift,” she said. “People are demanding real-time responses from brands and aren’t prepared to wait around.

“The result is that the new business coming in has beaten our expectations and has actually doubled over the last year,” she said.

Intercom achieved so-called “unicorn status” two years ago when its valuation topped $1 billion. Overall, the company has secured moe than $240 million from backers.

It now has in excess of 30,000 paying customers and crossed $150 million in revenue at the end of the year, bringing it close to profitability.

Mr McCabe said he had planned to hand over the reins earlier this year, but the Covid-19 crisis had derailed this temporarily.

He stressed that the decision to change roles had nothing to do with allegations of inappropriate behaviour made by female staff some years ago. Mr McCabe strongly contested the allegations, details of which became known last year, resulting in an independent investigation. The results of the inquiry led the board to continue to back him as chief executive.

He says the future of Intercom is bright. “It’s a big change for me but even so I couldn’t separate myself from the company even if I tried. It’s exciting and we’re just getting started,” he said.