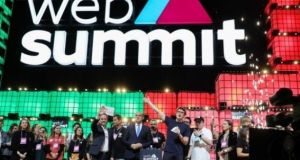 Paddy Cosgrave, chief executive and co-founder of Web Summit (centre right) at the official opening ceremony of the 2019 Web Summit in Lisbon. Photograph: EPA/MIguel A Lopes

Web Summit, the tech conference that started life in Dublin before relocating to Portugal, will take place both on and offline in early December, its organisers have said.

Doubts had been cast over whether a physical event would be held this year due to the Covid-19 crisis, particularly after its organisers opted to hold its North American sister conference Collision remotely.

However, speaking ahead of a press conference to coincide with day two of “Collision from Home”, Web Summit co-founder and chief executive Paddy Cosgrave confirmed its flagship event, which attracted 70,469 attendees last November, will proceed both as a physical event and remotely with an expected combined audience of 100,000 people.

The company behind the summit did not provide a breakdown of how many people it expects to attend the conference in person. Mr Cosgrave later said it would not be able to answer this until nearer the time, with the number dependent on what health protocols are in place in Portugal by then.

Web Summit is usually held in the first week of November, but is due to run a month later this year. The format of the Lisbon event is not expected to be decided until early October and will again be dependent on the protocols in place at that point. The organisers said once a format has been agreed, it will be reviewed on a weekly basis to take account of possible changes to Covid-19 measures.

Collision from Home, the first conference to run on Web Summit’s proprietary conference platform, is currently taking place remotely with 32,122 attendees from more than 140 countries.

The event, which began in New Orleans before relocating to Toronto, was taken online due to the coronavirus pandemic, with the organisers offering either a refund or full transfers of their tickets to next year’s in-person event.

The Web Summit conference was founded by Mr Cosgrave, Daire Hickey and David Kelly in Ireland in 2009, with fewer than 400 attendees at the inaugural gathering. The relocation of the tech conference to Portugal in 2016 enabled the company to significantly grow the event, with the number of registered attendees rising from fewer than 30,000 in Dublin in 2015 to 50,000 a year later in Lisbon.

In 2018, the Web Summit agreed a ten-year deal to remain in Lisbon until at least 2028 under a €110 million agreement with the Portuguese government.

The most recent official figures indicate 39,737 confirmed Covid-19 cases in Portugal and 1,540 deaths.

1 Belgium helps Ireland to a Brexit boon
2 ‘My rent here is so low it’s a joke’
3 This charming man: how Paschal Donohoe won the Eurogroup presidency
4 What is Covid Tracker Ireland?
5 Bank of Ireland launches €200,000 prize fund
Real news has value SUBSCRIBE