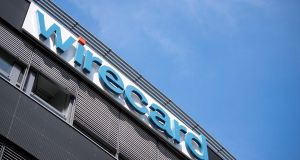 Shares in the German technology groupwere only two years ago was welcomed into the prestigious Dax 30 index. Photograph: EPA

Shares in German electronic payments company Wirecard plunged as much as 71 per cent on Thursday as the group revealed that its auditors in EY had refused to sign on its annual accounts due to a missing €1.9 billion.

The company had seen its low-profile Irish business caught up an external investigation in recent months amid reports of accounting irregularities across a number of the group’s international operations, including Singapore, Dubai and India.

Wirecard said in a statement on Thursday that EY was unable to confirm the existence of €1.9 billion of cash balances in trust accounts, representing about a quarter of its balance sheet, and that there were indications that a trustee of Wirecard bank accounts had sought to “deceive the auditor and create the wrong perception of the existence of such cash balances”. Its annual accounts have been delayed.

Auditor EY had regularly approved Wirecard’s accounts in recent years, and its refusal to sign off for 2019 confirms failings found in an external probe by KPMG, completed in April.

The latest development is a stark reversal of fortune for the Munich-based fintech, which was founded in 1999 and joined German’s blue-chip Dax stock market index two years ago.

Wirecard’s board hired KPMG last October to investigate a series of allegations that had appeared in the Financial Times and other publications, alleging the company had reported higher revenues and profits based on fictitious customer sales.

One of the FT allegations was that a Wirecard partner company, Dubai-based Al Alam Solutions, a so-called third party acquirer (TPA) which helps retailers accept credit card transactions, had routed sales in the names of suspect clients through subsidiaries of the German group in Dubai and Dublin.

Efforts by The Irish Times to secure comment from directors of the Irish business, Wirecard UK & Ireland, on Thursday were unsuccessful. Al Alam, which had reportedly denied any wrongdoing, went into liquidation last month.

Wirecard said on April 28th, when it received the KPMG report, that the special investigators had found “no incriminating evidence” for a series of accusations of balance sheet manipulation by the company.

“In all four areas of the audit – third-party partner business (TPA) and Merchant Cash Advance (MCA) / Digital Lending as well as the business activities in India and Singapore – no substantial findings were found which would have led to a need for corrections to the annual financial statements for the investigation period 2016, 2017 and 2018,” it said.

However, the KPMG forensic investigators said in the report that they could not say for definite whether reported revenues from TPA business relationships and certain Wirecard subsidiaries, including the Dublin unit, actually existed or were correct in terms of their amount.

All told, it was unable to verify the existence of €1 billion or revenue. That’s because certain TPA partners had refused to participate in the investigation, it said.

1 In this strangest of recessions, what happens next for Ireland?
2 Chris Johns: Boohoo exposed on pay and conditions in digital economy
3 Hotel bookings collapse in wake of additional Covid restrictions
4 FBD changes wording of business insurance policies amid fight over virus payouts
5 Michael O’Leary is the boss you want to lead an airline out of crisis
Real news has value SUBSCRIBE