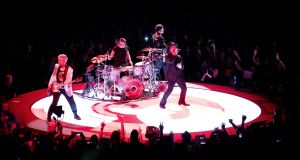 Dublin-based private equity group VentureWave Capital has closed the first round of fundraising for a €100 million fund that will invest in technology companies in Ireland.

It is understood that the fund has raised more than €20 million initially, with its backers including U2’s Adam Clayton and The Edge. It is expected to take strategic stakes in about 15 Irish companies with high-growth and scaling potential.

Investment levels will range over time from €1 million to €25 million and the fund will target cloud-based technology companies in sectors including education, healthcare, food and agriculture, energy and the environment.

A second stage of funding is underway with negotiations taking place with institutions, high net worth individuals and family offices to raise additional funding.

Called Impact Ireland, the new fund is seeking investments that will “generate a return for society as well as investors”. It will back “profit-driven companies which also advance the UN’s Sustainable Development Goals”.

VentureWave Capital is headed by chairman Alan Foy and managing partner Kieran McLoughlin, who stepped down as the New York-based chief executive of The Ireland Funds in 2018.

Its global advisory council is chaired by former taoiseach Enda Kenny, and its backers include Clayton and The Edge, Ireland Funds chairman Eugene McQuade, and Anne Heraty, co-founder and chief executive of recruiter CPL Resources, and Stanley Quek, who leads a property development company in Singapore.

Mr Kenny said the fund would be a “powerful corps of advocates for developing the next generation of successful Irish businesses and accelerating the impact that they will have”.

Mr McLoughlin said the fund expects to make its first investments this year. “We are in active dialogue with a number of prospective pipeline investment companies and are confident of building great companies from Ireland with global scale and ambition,” he said.

The fund is a member of New York-based not-for-profit Global Impact Investing Network, and says it is the first Irish signatory of the World Bank’s International Finance Corporation’s Operating Principles for Impact Measurement, which gauges the social benefit of investments.