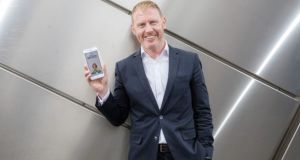 KBC Bank Ireland, which has been gaining customers on the back of digital innovations such as allowing mobile users to open new accounts with a selfie, has updated its apps so that users can report a stolen card and be issued with an immediate digital replacement.

The bank said the newly improved app, which has been designed in consultation with customers, allows users to access 85 per cent of functions within one touch.

Common banking functions such as reporting lost or stolen cards, travel notifications, PIN reissues and the opening of new accounts, can all be carried out via the revamped app. In addition, customers receive both physical and digital cards so that they no longer have to continually search for their wallets or purses to access details when making online purchases.

“Rather than just re-engineer the app ourselves we gave it to about 1,000 customers and asked them to co-design it with us so it has a new look and feel that makes the app that bit more intuitive to use,” said Eddie Dillon, director of innovation at KBC Bank Ireland.

“We found that nearly one in two customers contact our helpline annually about possible lost or stolen cards and this causes a lot of anxiety. With the updated app, customers can just halt their cards and replace them in an instant and have uninterrupted service rather than having to get access to emergency cash,” he added.

Mr Dillon said KBC’s “digital first” services, has proven to be a big hit with customers with the bank having added over 63,000 new current accounts over the last year. More than one in five KBC extra current accounts are now opened via the bank’s mobile app.

The bank earlier this year launched a new service that makes it possible to apply for loans of up to €20,000 via the app with a response promised in less than an hour. That service came about less than a year after KBC introduced an option enabling customers to open new current accounts in less than five minutes using just a selfie for identification purposes.

1 Provisional liquidator appointed to Dublin engineering firm
2 How can I view my dead brother’s will if I’m not the executor?
3 Kerry’s Chinese sales set for 30% hit from coronavirus
4 Bursting of Tesla bubble a case of ‘not if, but when’
5 Bank of Ireland staff in line for 2.95% pay increase
Real news has value SUBSCRIBE