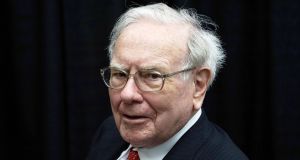 Warren Buffett’s Berkshire Hathaway plans to invest at least $300 million in the parent company of India’s largest mobile payments group, Paytm, according to two people close to the matter.

The investment in One97 Communications marks Mr Buffett’s first big investment in the south Asian country, and comes as the renowned investor grows increasingly comfortable with new technology and payments companies through Berkshire’s holdings in Visa and Apple.

Berkshire could increase its level of investment in the company depending on its performance, one of the people added.

Paytm’s success in India comes as fast-growing digital payment platforms spring up across Asia, led by Alibaba’s Alipay and rival Tencent’s WeChat Pay. Both Chinese groups have become leading investors in other payments, internet and online shopping businesses in the region.

Mr Buffett has historically been a reluctant tech investor. At the cusp of the new millennium during the dotcom boom the billionaire investor avoided making any bets on tech stocks because he said he did not understand their business model.

More recently he has made a big investment in Apple, while pulling out completely from IBM. The main rationale behind the Paytm deal is that Mr Buffett believes there is significant upside in investing in India’s fast-growing mobile and cashless economy, said a person briefed about the transaction.

The payments industry in India is viewed by analysts as ripe for investment. Prime minister Narendra Modi removed 86 per cent of the country’s cash from circulation in late 2016, giving a boost to digital payment operators such as Paytm. Domestic groups now face incoming competition from foreign companies such as Amazon, Facebook and Google.

Earlier this year, Walmart struck a $16 billion deal for a majority stake in Indian ecommerce company Flipkart, the largest direct foreign investment into the country. Amazon has expanded its own business in the country and is now facing off with Flipkart for market share.

Paytm was valued at $10 billion last year, making it one of India’s most-valuable start-ups. The valuation will remain at that level after the investment from Berkshire, one person said.

The link for Mr Buffett to the Indian market came through Berkshire’s vice-chairman of insurance operations Ajit Jain. Mr Jain joined the investment group in the mid-1980s and is considered one of Mr Buffett’s closest deputies.

1 How long can Government afford to keep State pension age at 66?
2 Declan Ganley denies Donald Trump trying to swing lucrative 5G contract for Rivada
3 Marquees and fleets of delivery vans: how supermarkets are ready for Lockdown 2
4 Brexit: UK and EU agree to intensify talks in rush for deal
5 Ryanair and Eir the worst for customer service during Covid crisis
Real news has value SUBSCRIBE