Qualtrics to create more than 350 jobs in Dublin expansion 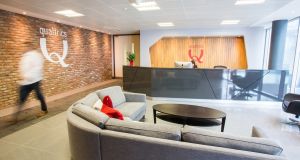 US software company Qualtrics plans to create more than 350 jobs in Dublin over the next four years to bring total headcount here to 600.

Qualtrics made the announcement as it marked the fifth anniversary of its Dublin-based European headquarters, which houses its sales, engineering, support and services operations.

The company also said it would create additional office space in the capital with the development of a new building in the city centre.

The building, which will be situated next to Qualtrics’s existing offices at Clarendon Row, near the Gaiety Theatre on South King Street, will expand the company’s facilities here to 57,000sq ft.

Qualtrics was founded by brothers Ryan and Jared Smith along with their father Scott, and Stuart Orgill in Provo, Utah, in 2002. It is a provider of cloud-based software that lets organisations create online surveys and track employee satisfaction and customer interactions.

More than 9,000 companies use Qualtrics’s software, including more than 75 per cent of the Fortune 100. Among its clients are well-known names such as Allianz, Microsoft, GE, Mastercard, Kellogg’s and Sony.

Dublin was chosen by Qualtrics as its first international office in 2013. The Smiths, who have Irish roots, previously told The Irish Times that their grandmother made them come to Ireland. The company now operates offices in nine countries on four continents.

“Five years ago, we started the European chapter of our story and it has surpassed every expectation we set back in 2013. We now work with over 1,500 organisations in EMEA and the success and growth of our business here is testament to the talent we have in Dublin,” said Ryan Smith, the company’s chief executive.

“We are five years in, but we’re just getting started and by expanding our footprint, we expect to continue to grow at a rapid pace and create more jobs in Dublin in the years ahead,” he added.

Mr Smith also paid tribute to the company’s first European employee, the late Dermot Costello who previously led the Qualtrics Ireland and who died of cancer in January. Prior to his death, Mr Costello established a fund to campaign for cancer research which has raised €140,000 to date with Qualtrics matching that figure.

The new investment is supported by the Government through IDA Ireland. Its chief executive Martin Shanahan said Qualtrics’s commitment to more than doubling its footprint locally “is a very strong endorsement of the technology ecosystem here”.