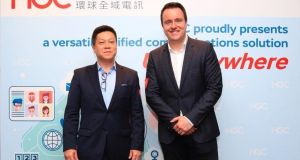 Irish technology company Blueface, which recently agreed a $500 million (€431 million) merger with US rival Star2Star, has signed a major contract to roll out a cloud-based communications system, called UC Anywhere, across 11 markets in Asia.

The partnership is likely to be the first step towards a bigger contract to launch its UC Anywhere service further afield.

Dublin-headquartered Blueface has signed the agreement with Hong Kong-based HGC, a company that was until last year owned by Three Ireland parent CK Hutchison.

UC Anywhere is a cloud-based application that enables businesses to be reached regardless of their location via a designated office number. The solution comprises a full suite of easy-to-use, portable and comprehensive services that include simultaneous ring, voicemail-to-email, document sharing, video conferencing and multi-party audio conferencing.

Founded in 2004 by Feargal Brady and Alan Foy, a former EY Entrepreneur of the Year award finalist, Blueface had over a million users in more than 42 countries prior to its recent merger. The company employs about 70 people, although it announced plans earlier this year to double its workforce in the future.

“The collaboration with Blueface enriches our business portfolio and proposition locally and internationally and enables us to deliver advanced market-driven solutions to meet the needs of all organisations, whether small, medium or large,” said HGC chief executive Andrew Kwok.

“Riding on our international backbone infrastructure . . . Blueface can now extend coverage from Europe and the US to Asia without having to go through a complicated service-provisioning process. We can also customise solutions to make them compatible with a variety of applications,” he said.