More than 350,000 organisations worldwide from Starbucks to the Garda and even Irish Water use ESRI’s maps 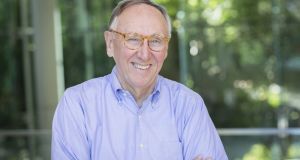 Jack Dangermond, co-founder and CEO, ESRI: describes himself as having been blessed for being lucky enough to have fallen into digital mapping as a career.

He may have a personal fortune of $4 billion (€3.4bn) but what really enriches Jack Dangermond’s life is knowing that he helps ensure people don’t lose their way.

So successful is the low-key businessman that Forbes magazine once ran an article about him claiming it was impossible to kill his company. Given that Environmental Systems Research Institute (ESRI), the mapping firm he and his wife Laura founded nearly 50 years ago, has survived so long despite fierce competition from technology giants such as Google, it’s hard to disagree.

ESRI’s track record is even more impressive when you consider that the company, which makes technology used by more than 350,000 organisations worldwide, has never taken a cent in outside investment aside from a $5,000 initial loan from Dangermond’s mother.

“I’m the luckiest guy in the world because I get to glimpse into virtually every activity that humans are doing,” he tells The Irish Times on a recent visit to Dublin.

ESRI is the industry leader in geographic information system (GIS) technology. This is a specialised mapping and spatial analytics software used for creating digital maps that help organisations make critical decisions such as predicting flash floods, managing supply chains in real time, and cutting disease outbreaks. The company has a 45 per cent share of the world GIS market. Collectively, the many businesses, government agencies and NGOs that use the firm’s software, create 150 million new maps every day.

“Every sector of humanity is using our technology. It’s not the map itself that necessarily matters, but the overlaying of those maps with spatial analysis tools to help organisations understand more,” says Dangermond.

If you ever wanted to know why Starbucks chooses one location over another, for example, then it is thanks to geographic insights they’ve gained from using ESRI’s software.

“Starbucks and more than 800 other US retailers including Walmart and Walgreens use our ArcGIS product suite to figure out store locations based on factors such as distance to highway access, footfall, population levels and so on,” says Dangermond.

It’s not just retail. Think of any human activity and there’s a likelihood you’ll find someone using the software to understand it better. Indeed, the company’s tech was recently used to assess damage caused in Puerto Rico by Hurricane Maria.

“If you think about it abstractly, there isn’t an area that isn’t touched by location, be that farming, disaster response, national security,” says Dangermond.

He says that it isn’t uncommon for opposing sides in disputes to use its software to build a case as to why something should or should not be allowed to proceed.

“Big oil companies use our software to figure out where to drill but at the same time there are also conservation organisations using it to define natural reserves and so on,” he says.

“Interestingly, though we’ve noticed users increasingly sharing information. Oil companies, for example, don’t want to do anything bad as it isn’t great for business. Increasingly they’ll take geodata that conservation groups have compiled and use it as a screening technique to develop a resource without damaging the environment,” Dangermond adds.

ESRI employs 3,200 globally and had revenues of $1.1 billion last year. The company’s Irish operation, whose clients include Coillte, has 85 staff and is looking to grow turnover from €7 million to €10 million by 2020.

“Ireland is like a microcosm of our world community. There’s organisations like Irish Water using our software to map out water assets, the Garda are using it for policing purposes and Coillte to manage their forests. It also being used in health, housing, social welfare, lots of areas where locational decisions are important,” says Dangermond.

The businessman describes the work that ESRI does as “the science of where”.

“It is a way to communicate that this is really about science and technology being brought together to help people understand big questions such as where should we locate, how do we make cities more liveable, how can we protect a certain area etc,” he says.

Humans have been mapping the landscape for so long that according to Dangermond, they’ve forgotten just how important it is to understand our environment.

“Fish don’t know about water and humans don’t really understand spatial analysis, but we’ve been navigating all our lives without ever being conscious of it. My big contribution I’d say has been to digitise the water, that is, to make spatial information explicit and put it in front of people through mapping so they can understand their circumstances and act accordingly,” he says.

Dangermond says the encroachment of Google on his company’s turf with Maps and Earth back in the 1990s, while a concern initially, has helped individuals become more aware of their world.

“Some people are more spatially literate than others and Google gave a great gift to the world with Google Maps because they lifted consciousness of space to consumers. As a result, people are no longer lost on this planet. Even if you’re in Timbuktu, you can find your way home because it is mapped,” he says.

Initially when Google started taking an interest in digital mapping, Dangermond was alarmed.

“I was really worried because I thought they were going to march right over our domain and take over everything and I think they might have also thought the same early on. But it turned out not to be the case and they went down a more B2C path so didn’t interfere too much with our business. We have a good relationship with them and have collaborated a number of times,” he says.

Google isn’t the only tech threat the company has faced. When it started out in 1969, ESRI was dependent on bulky mainframes, but now information is stored in the cloud.

“We’ve had to adapt to huge technological changes, going from mainframes, to minicomputers and then on to workstations and PCs before going on to the web. We take about 30 per cent of our revenue and pour it into research and development, and this has allowed us to keep evolving our architecture,” says Dangermond.

With mapping likely to be critical to the future success of autonomous cars, there are plenty of new opportunities for ESRI to explore and the business is currently exploring new areas such as advanced visualisation and machine learning to see how they might fit with the work it currently does.

I had a ‘wow, I’ve found Candyland’ reaction once I realised it was possible to connect the science of geography with decision-making

Dangermond describes himself as having been blessed for being lucky enough to have fallen into digital mapping as a career.

“I started working in a lab at Harvard looking at spatial analysis and back then they were inventing some of the basic ways to digitise geography and make maps from the information. I had a ‘wow, I’ve found Candyland’ reaction once I realised it was possible to connect the science of geography with decision-making. I loved getting into it because I could see my life would matter if I pushed on at this,” he says.

In addition to bootstrapping its way to success, Dangermond is keen to do his bit at a social level. A keen environmentalist and philanthropist, his company has distributed its software virtually free to over 11,000 NGOs and provided $1 billion worth of its product to academic institutions.

It has been at least eight years since the businessman visited Dublin. He’s impressed with a lot of the organisations here such as Ordnance Survey Ireland, who he believes are doing great work in the mapping space.

Dangermond believes Ireland has a great opportunity to establish itself as a world leader in open data and civic innovation by following the lead of Los Angeles and establish a complete collection of mapping information.

LA under mayor Eric Garcetti and in collaboration with ESRI, last year unveiled the GeoHub initiative which gives widespread access to the city’s location-based data through an online portal to create better efficiencies.

“I would love to see the Irish leadership take advantage of the investments they’ve already made by putting in a basic information structure to create a more integrative approach. However, to do this, the leadership need to be tech-savvy at a policy level and to get conscious about using geography as a common framework for doing data integration and applying it to deal with issues that affect us all, whether that be dealing with housing issues or tackling traffic problems ” says Dangermond.