Slush puppies in focus as start-ups gather in Finland 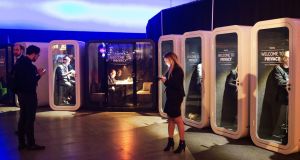 Attendees of Slush working in privacy pods during the event in Helsinki, Finland, in 2016. Photograph: Getty Images

It may not be as big as Web Summit, and the location certainly isn’t as balmy as Lisbon, but Slush, a Finnish tech conference which gets under way on Thursday, is looking to become as well known.

In fairness it is hard to resist an event that last year had a huge banner at the entrance which proclaimed: “Nobody in their right mind would come to Helsinki in November. Except you, you badass.”

The event has grown from a 300-person gathering in 2008, and now sees speakers such as former US vice-president Al Gore appearing on stage before an audience of 20,000 attendees that includes 2,600 start-ups, 1,500 investors and 600 journalists.

As with the Web Summit, Slush has expanded significantly in recent years, and now run events in Tokyo, Singapore and Shanghai.

The conference is looking to take advantage of the cold, dark days to encourage people to huddle together to listen to the latest on topics such as AR/VR and machine learning.

Finland may not be as well-known as some other European nations for its start-up scene, but Slush is going all out to rectify this. The big thaw begins now.