Facebook tool shows if users were duped by Russian propaganda 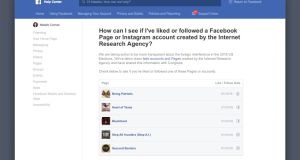 “We’ve taken down fake accounts and pages created by the Internet Research Agency, and have shared this information with Congress”

Facebook has created a new tool for users to determine if they liked or followed a fake account or page created by the Russian Internet Research Agency (IRA). These Kremlin-linked accounts, created in the run up to the US presidential election, posed as US right-wing groups with names including Being Patriotic, Heart of Texas, and Secured Borders, and with the aim of polarising online opinion and influencing the election outcome.

“We are taking action to be more transparent about the foreign interference in the 2016 US elections. We’ve taken down fake accounts and pages created by the Internet Research Agency and have shared this information with Congress, ” Facebook states on a mock-up of the tool, which will go live later this year.

The social networking company went on to state that it is “important that people understand how foreign actors tried to sow division and mistrust using Facebook before and after the 2016 US election”.

1 Michael O’Leary is the boss you want to lead an airline out of crisis
2 Estée Lauder staff at Dublin airport plan further strike action
3 Should I switch bank now with Ulster Bank at risk of closing?
4 Fortnite owner signs multimillion deal to buy Irish ‘kidtech’ firm
5 Air travel never going ‘back to way it was’
Real news has value SUBSCRIBE