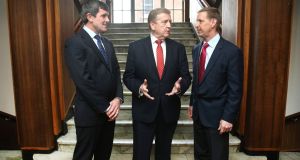 US technology group Equifax is to almost double its Irish workforce with the addition of 150 new jobs next year.

The company, which is headquartered in Atlanta, Georgia, currently employs 200 people at a new IT development centre in Dublin, as well as at a separate facility in Wexford.

“We said last year that we were betting on Dublin to deliver the talent we need, and that bet has paid off significantly,” said Paul O’Dwyer who heads the Dublin facility.

“It has been a whirlwind year of rapid growth, and we are now going back into the recruitment market with a further 150 vacancies to fill as part of our continued investment in Ireland,” he said.

The chairman and chief executive of Equifax, Richard Smith, stepped down in September in the aftermath of a data breach that exposed the personal information of as many as 143 million people.

The company specialises in providing bespoke solutions for clients operating in the consumer credit and business sectors in 24 states across the world.

Its Dublin centre develops new and advanced solutions for its global customers, and the vacancies announced will mostly be filled by software engineers, business analysts and other IT specialists.

“Ireland today is a globally recognised tech hub, and we are building a diverse, highly-skilled team who are at the forefront of excellence in innovation,” said Mark Rohrwasser, interim chief information officer at Equifax.

“This expansion also demonstrates that Ireland has both the necessary business infrastructure and talent pool to continue to attract global services companies here,” he said.

The company has begun hiring for the 150 vacancies with a goal of filling all positions over the next 12 months.

1 Air travel never going ‘back to way it was’
2 Should I switch bank now with Ulster Bank at risk of closing?
3 Will brother’s widow get half of our parents’ estate when they die?
4 ‘Tax war’ will hit Ireland if digital tax talks fail, OECD says
5 Irish Social Housing Fund secures €30m from AIB to buy 100 homes
Real news has value SUBSCRIBE