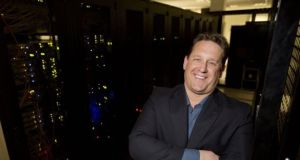 A Dublin-based investment group led by Irish entrepreneur Colm Piercy has made a significant return on the sale of a US data centre company, which it previously co-owned.

Chirisa Investments, which the Digiweb founder established in early 2011, has according to industry experts made over five times its original investment in 365 Data Centers, a hybrid data centre and networks solutions provider, which has just been acquired by Stonecourt Capital for an undisclosed sum.

The group co-led a $100 million (€85 million) deal in 2017 to buy the California-headquartered company, with Mr Piercy going on to become its chairman. He told The Irish Times at that point that there was an “insatiable demand” for data centres in the US, and in particular in Northern Virginia, where much of the company’s interests are.

The region has become a major cluster for data centres with as much as 70 per cent of all US internet traffic estimated to travel through the area.

Since the acquisition of 365 Data Centers, the company has expanded to become one of the largest privately owned operators across the eastern United States, delivering cloud, co-location and connectivity solutions to over 650 enterprise, carrier and content clients across 12 data centres and a further 21 network nodes.

“Our successful investment in 365 is the latest example of Chirisa’s ability to put our own capital and judgement as an investor/operator to work alongside institutional investors,” said Mr Piercy.

“Chirisa and our partners leverage our proprietary insights, strategy and relationships to deliver outsized returns at scale. We continue to see interesting opportunities for value creation from Chirisa’s unique approach to investments in critical digital infrastructure,” he added.

Mr Piercy said Chirisa has strengthened and expanded its team in recent months and has a “pipeline of attractive investment prospects” that it is progressing.