Google given sceptical reception in Supreme Court against Oracle 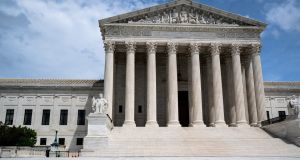 The Supreme Court considered on Wednesday whether Google should have to pay Oracle billions of dollars in a long-running lawsuit over software used on many of the world’s smartphones. Photograph: Anna Moneymaker/The New York Times

Google faced sceptical questioning from US Supreme Court justices on Wednesday over its claim that code it copied from rival Oracle is not protected by copyright, in a case that many experts have warned could have far-reaching effects on competition in the tech industry.

However, the justices appeared to show more sympathy with Google’s argument that use of the code should be covered by the “fair use” defence that allows limited use of copyrighted work.

Google’s use of the Oracle code in its Android mobile operating system has been the focus of a court battle that has lasted a decade, with Oracle claiming it is owed damages of $9 billion.

Many software developers – including 83 computer scientists who filed a brief supporting Google – have said that the internet company followed common industry practice and a win for Oracle would make it easier for big companies to block access to new rivals, hurting innovation.

Oracle’s complaint against Google has drawn the support of the US government, which has intervened on its behalf. Malcolm Stewart, deputy solicitor general, told the court on Wednesday that copyright protections were needed in order to preserve “incentives to create” software.

The case turns on whether Google had the right to use some of the APIs, or interface, from Oracle’s Java software framework.

By adopting the Java interface, which was already widely used, Google made it easier for millions of app developers to write code for Android, giving the operating system a big head start.

In an oral hearing on Wednesday, the justices grasped for analogies as they struggled to describe how APIs work in the software world. Chief Justice John Roberts compared Google’s action to “cracking a safe”, while Justice Clarence Thomas said it was like taking the playbook used by a rival American football team.

Several justices challenged Google’s claim that the APIs were not copyrightable under the so-called merger doctrine, which holds that if there is only one way to perform a particular task, then it is inseparable from the task and doesn’t qualify for protection.

Mr Roberts said that the “only reason it was necessary” for Google to use the Oracle code was that it had been “very successful”, adding: “It seems a bit much to penalise [/Oracle]/for that.”

Justice Neil Gorsuch pointed out that Apple and Microsoft had both created mobile operating systems without needing to copy the Java interfaces, raising a question about why Google believed it had no choice.

Thomas Goldstein, appearing for Google, said that choosing which software approach to use was like picking between freely available languages like French and English, and that once Google had chosen Java, it had to use the APIs.

He also said that by co-opting existing software like this, tech companies were able to develop “a new computer program that supplants an existing one”, pushing the whole digital world forward.

Google was also appearing before the court to challenge an appeals court ruling in Oracle’s favour on the issue of fair use. Mr Goldstein said that since decisions about fair use were based on the facts presented to a jury, no higher court had ever tried to overturn a verdict in the way the appeals court had done.

However, both Mr Stewart and Oracle claimed that the appeals court had based its decision on an issue of law, rather than just the facts in the case, giving it the right to intervene.

Joshua Bloch, a software developer who worked on the Java interface, said that if Google loses the copyright argument but wins on its fair use defence, it would be a “weak win” for the rest of the software industry.

Fair use “is not something you can necessarily depend on” since it turns on being able to convince a jury about the merits of a particular case, he said. “Only people with lots of lawyers will depend on it.” – Copyright The Financial Times Limited 2020