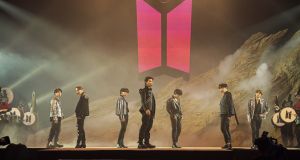 Samsung has withdrawn products branded with K-pop superstars BTS from online platforms in China after a band member’s comments on the Korean war sparked anger among Chinese internet users.

The furore facing the South Korean technology group came after Kim Nam-joon, known as RM, commented on the 70th anniversary of the Korean war after BTS won an award for promoting relations between South Korea and the United States from the Korea Society, a New York-based non-profit organisation.

“We will always remember the history of pain that our two nations shared together, and the sacrifices of countless men and women,” Mr Kim said.

The comments sparked fury on Chinese social media. On Weibo, China’s Twitter-like platform, one user responded: “Get out, don’t come to China to make money.”

Another said: “They are Koreans so their stance is understandable. But we are Chinese, it’s also OK that we don’t accept this position!”

The moves highlight the risks foreign brands face in China against the backdrop of increasing nationalism.

Companies spanning airlines, hotels and carmakers as well as the National Basketball Association have battled reputational crises and drawn the ire of regulators after touching on politically sensitive issues including Taiwan, Tibet and Hong Kong. Many global brands, including Gap and Mercedes-Benz, have been forced to apologise to Chinese consumers while facing criticism in western markets for allegedly kowtowing to Beijing.

“Learning from history, facing the future, cherishing peace and promoting friendship should be our common pursuit and it is worth our joint efforts,” said Zhao Lijian, a spokesperson for China’s foreign ministry, who added that he was aware of media reports on the BTS controversy.

Samsung removed BTS edition smartphones and earbuds from its official stores on ecommerce platforms JD.com and Alibaba’s Tmall as well as its own website.

The problems linked to BTS, one of South Korea’s most recognisable cultural exports, are a fresh blow to businesses already struggling in China. Korean companies have faced consumer boycotts and regulatory hurdles stemming from Beijing’s 2017 protest over Seoul deploying a US missile defence system on Korean soil.

“Given the sensitive modern history of northeast Asia, anti-Korean sentiment in China can resurface anytime due to seemingly trivial comments,” said an official with the cultural ministry in Seoul, who asked not to be named because of the sensitivities.

The backlash against BTS in China also comes at an awkward time for Big Hit Entertainment, which is scheduled to list shares on the stock exchange on Thursday in an initial public offering that values the Seoul-based company at $4.1 billion (€3.47 billion).

However, Na Seung-doo, an analyst at Seoul brokerage SK Securities, did not expect the problems in China to derail the IPO.

“BTS has a substantial fan base in China but their China sales are already minimal as Korean celebrities are unable to appear on Chinese TV or to hold concerts in the country. Merchandise sales in China could be hurt but its portion of the Big Hit’s overall sales is also limited,” he said.

He added that the impact on Samsung’s earnings would also be “limited” because its market share for smartphones in China is only about 1 per cent. – Copyright The Financial Times Limited 2020

1 How much state pension will I get next year?
2 Oxford Covid vaccine trials offer hope for elderly
3 Fair deal? Family at odds with hospital and each other not so sure
4 Ulster Bank to introduce new card payment controls on app
5 How long can Government afford to keep State pension age at 66?
Real news has value SUBSCRIBE