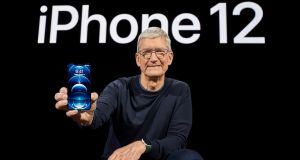 Apple took a step into the next generation of mobile technology as it announced its first 5G-enabled iPhones on Tuesday.

The company unveiled four new iPhone 12 models and new additions to its smart speaker range at a virtual event.

Describing 5G, as the “most exciting step yet”, Apple chief executive Tim Cook said Apple planned to bring 5G to all its new smartphones.

“Every decade there’s a new generation of technology that provides a step change in what we can do with our iPhones,” said Mr Cook. “The next generation is here. Today is the beginning of a new era for iPhone.”

The iPhone 12 comes with a 6.1 inch edge to edge custom OLED display, new colours and a new display technology, known as Ceramic Shield, to make it more resistant to drop damage, and is powered by the new A14 Bionic chip, which Apple said is about 50 per cent faster than the previous A13 that powered the iPhone 11. It has a dual camera, with an ultra wide lens and a new wide lens with an f1.6 aperture, smart HDR 3, and a 26mm focal length.

The advanced dual camera system also refines the iPhone’s night mode, which is now available for the ultra wide camera and front-facing TrueDepth camera for selfies.

Video has also been improved, with a Night Mode for Apple’s time lapse setting that can be used with a tripod for longer exposures.

The iPhone 12 Mini has a 5.4 inch display, incorporating the same Ceramic Shield as the iPhone 12. Preorders for the iPhone 12 and 12 Mini begin on Friday, with the phone shipping a week later.

Mr Cook described the new devices as “the start of a new era for iPhone”.

Apple stuck with the Pro branding for two of its flagship devices, but made a few changes such as bigger screens and advanced camera technology.

The iPhone 12 Pro comes with a 6.1 inch display, while the Pro Max pushes it up to 6.7 inches. The top-end smartphones include a 3D lidar scanner, already seen in the iPad Pro, and will also feature Apple ProRaw later this year, aimed at photographers.

The Pro Max camera is the star of the show, with a new optical image stablisation system, that stabilises the sensor rather than the lens and helps to cut out vibrations caused by movement. HDR video recording has also been brought to the iPhone, capturing 60 times more colours than before, and will record in Dolby Vision HDR.

“With the introduction of four new models together with the already announced iPhone SE, Apple has a very clean portfolio of devices that offer a “good, better, best” choice for consumers,” said Ben Wood, chief analyst at CCS Insight.

“The big news for me is the iPhone 12 Mini. After years of phones getting progressively bigger, Apple is reversing the trend by offering a flagship product in a smaller package. I think it’ll be a hugely popular move. Where Apple goes, others follow, and I expect all rivals to make similar moves over the next 12 months.”

The company is not the first to include 5G connectivity in its devices, with Samsung, Nokia and Google already announcing 5G compatible phones in recent weeks. The technology still in its relative infancy though; in Ireland, the major networks have begun offering 5G to customers, but coverage is still limited. However, analysts said the entry of Apple into the market could kickstart the shift to 5G.

“Inevitably, the iPhone 12 will mark the real start of 5G for the consumer mass market. Samsung and several Android phone-makers may have had an 18-month head start, but the limitations of early 5G devices, coupled with the time needed to expand network coverage, have meant momentum is still building. Apple is following its playbook by timing this launch for when the market is ready, rather than the technology,” said Mr Wood. “In markets like China and South Korea that are seeing rapid adoption, a 5G iPhone is essential. In Western markets it will be Apple that kick-starts the transition from 4G.

“Apple’s first steps into 5G are typical of its tactic of delivering technology when it’s ready rather than trying to drive up adoption by brute force. Although Apple faces a sea of competitive alternatives, its late entry to the 5G party some 18 months after rival Samsung has left few scars.”

Apple has also developed a new wireless charging system for its smartphones, called MagSafe for iPhone. The new system is intended to improve wireless charging, “snapping” the wireless charger to the phone and making sure your phone always hits the right spot on the charger.

The company kicked off Tuesday’s event with the HomePod Mini, a custom engineered mini version of its smart speaker that can also function as the brains of your smarthome. The integrated Siri means it will work with your iPhone and can recognise voices of different members of your family to give personalised results, and the device can also sense when an iPhone is nearby, and a new Intercom feature will let users send messages between HomePods around the home.

“Offering the HomePod Mini at $99 is surprising. Such aggressive pricing is rare from Apple and illustrates the company’s efforts to invigorate its smart home strategy given intense competition from Amazon and Google. It is a positive move, but Apple still faces an uphill battle when it comes to smart home tech,” said Mr Wood.

1 Bake-off soy sauce tweet backfires for UK trade ministry
2 How long can Government afford to keep State pension age at 66?
3 Halfords sees 700% increase in sales of e-scooters
4 Missing Wirecard executive could be Austrian spy, prosecutors say
5 Developers may need to go back to the drawing board as one-beds fall from favour
Real news has value SUBSCRIBE