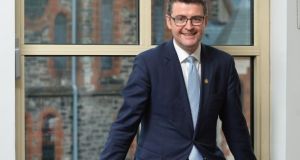 Kainos chief executive Brendan Mooney. The cimpany says it has benefited from several one-off efficiencies in recent months including reductions in recruitment, training and travel expenditure

Shares in Belfast-headquartered software company Kainos surged more than 27 per cent in mid-morning trading on Wednesday after it said it expects full-year revenues and profits to be ahead of forecasts.

Kainos said the business had experienced a “very strong trading performance” during the April to early October period on the back of increased customer demand and the ongoing shift by customers towards digital.

The company, which provides digital technology services and platforms to customers that include the National Health Service (NHS), was established in 1986 as a spin-out company from Queen’s University Belfast. It employs about 1,700 people.

Kainos said it expects the full-year ending March 31st to be “materially ahead of current consensus of revenue and significantly ahead of adjusted profit forecasts”.

It said it has benefited from several one-off efficiencies in recent months including reductions in recruitment, training and travel expenditure.

“Looking forward, we remain confident in our outlook for the financial year, which is underpinned by a robust pipeline and a significant contracted backlog,” it said.

The company is due to issue results for the six months ending September 30th, next month.

Brokers reacted positively to the latest update with both Investec and Canaccord reiterating their Buy recommendations. Canaccord also raised its target price to 1,550p from 1,020p.

“We believe there is plenty of growth runway ahead,” said analysts.

Investec analysts meanwhile described Kainos as “a core sector pick due to its structural growth exposure and high-quality model”.

1 Bake-off soy sauce tweet backfires for UK trade ministry
2 How long can Government afford to keep State pension age at 66?
3 Halfords sees 700% increase in sales of e-scooters
4 Missing Wirecard executive could be Austrian spy, prosecutors say
5 Developers may need to go back to the drawing board as one-beds fall from favour
Real news has value SUBSCRIBE