Racing into space from Blanchardstown 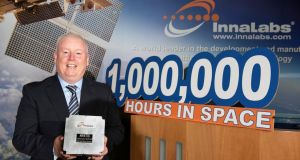 John O’Leary, general manager and chief executive of InnaLab’s Irish operations: “This was an opportunity, and a challenge, to do something different.”

Both Deep Impact (slow-moving, relatively science-based, sombre) and Armageddon (directed by Michael ‘Bayhem’ Bay, which is all you need to know) were released in 1998 but both used the same conceit at their fictional core – if we detected a giant, extinction-level space rock, hurtling towards Earth, could we stop it?

Both films, in spite of their different tones, seemed equally ludicrous but apparently are not. NASA and the European Space Agency (ESA) have recently announced a collaboration on a project called Asteroid Impact and Deflection Assessment (AIDA).

Part of that mission is the DART, or Double Asteroid Redirection Test which posits slamming a high-speed rocket into a distant asteroid to see if its path through space can be deflected. If it works, the mission could form the basis of a genuine planetary defence system, able to nudge aside any marauding space rocks that want to do to humanity what was done to the dinosaurs 65 million years ago.

A follow-up mission, Hera, will come along later to study the effects of the impact test. The asteroid in question, known as Didymos, comes as close as 11 million kilometres to the Earth, which is close in astronomical terms, but a heck of a long way away in every other sense.

So how do we get there? And how, once we’re there, do we know we’re facing in the right direction?

Simple – you go to a plain-looking office building in Blanchardstown and ask John O’Leary.

If you’re looking for the epitome of the steely-eyed missile-man, or the typical NASA boffin, O’Leary isn’t it. He’s something arguably much more important – a businessman who saw an opportunity for Ireland to get into the space race.

“I’ve worked in the electronics industry all my life,” O’Leary tells The Irish Times.

“I was part of that wave of the American multinational tech companies coming to Ireland in the 1980s. I originally worked for a Boston-based company called Prime Computers. When that got sold I worked for others, including Benchmark Computers, but all along we were using NASA-style technology readiness levels in our work, the same ‘zero to nine’ scale in terms of going from concept, right through the product realisation.”

That would stand O’Leary in good stead, as he met Russian-born entrepreneur Dmitry Simonenko, who had set up InnaLabs in 2001. Fancying a move to Ireland’s tech-rich environment in 2012, Simonenko and O’Leary teamed up to establish a base in Blanchardstown. O’Leary is now the general manager and chief executive of InnaLab’s Irish operations.

“We originally looked at sites down near Citywest [in Saggart] but there’s still active quarrying going on down there, so the vibrations would have been a problem for our sort of products,” says O’Leary.

Vibrations are problematic because what InnaLabs is making is an incredibly delicate navigation system for a space craft.

The principle of the gyroscope dates back to the 1700s, but such devices can accurately measure movement in any single plane of direction – from yawing left or right, to vertical movements, or to rolling around a central axis. Basically, put enough gyroscopes in one place, and tell them where they’re starting off, and they’ll minutely measure each subsequent movement to work out where they’re going, and where they need to go next.

“I had a very good job working for the American companies, but this was an opportunity, and a challenge, to do something different. It was the first time that someone asked me to work with a technology that could become a global player from an Irish perspective. Something in which we could train people, and so in years to come I figured I’d be able to drive past here and say; ‘I was a part of building that up’ rather than being part of the multinationals which move on to another territory when they get a better offer,” says O’Leary.

To make gyroscopes, you don’t simply need to filter out vibrations from nearby quarries, you also need to build Class Five and Class Seven ‘cleanrooms’ – areas where dust and debris are simply not tolerated. Imagine a multimillion euro spacecraft, millions of miles out from Earth, suddenly rudderless because a mote of dust has caused a gyro to jam. That’s the level of responsibility that InnaLabs works with.

How does an Irish company break into the space race, though? Speed dating, it would seem.

“Jose Beitia came to work for us, and he had formerly been at Sagem, a French defence and aerospace company. He had worked on an advanced gyroscope navigation system that eventually became part of the standby instrumentation for the Airbus A380. So he was quite famous. We pulled together some funding, some of which came from Enterprise Ireland, and started to develop that tech,” O’Leary explains.

“It was originally more for land-based work for us, but we started getting interest from space operations. The device is built and tested in a vacuum, so actually it kind of automatically works well in space already.”

At this point O’Leary picks up the actual device. It’s a grey box, small enough to fit neatly into the palm of a splayed hand. Called an Inertial Measurement Unit, or IMU, this is effectively the sat-nav for a space craft.

Inside are three delicately balanced gyroscopes, each measuring movement in any one plane – pitch, roll, or yaw. They are backed up by accelerometers, which measure the speed of the movement in those directions. Combine all six data-points and you can work out your precise location, even in the deepest of deep space.

“We went with then minister for training and skills, John Halligan, on a trade mission to Holland, part of which was talking to the European Space Agency. It was really enjoyable. We got to look around ESA, we got to meet the Irish people already working there, and then for two hours we were asked to pitch our ideas to a board in ESA.

“It was like speed dating – there were 10 companies, all taking their turn to pitch. Everyone else kind of finished up pretty quickly, usually within 20 minutes or so, and then we got stuck in. We showed them our product, we said to them how we could offer solutions to their problems, and though the event was supposed to finish at 5pm, we were still there talking at 7pm. Which I took to be a good sign.”

InnaLabs got the contracts with ESA that will now see its IMUs made in Blanchardstown, fitted to a space probe, and fired at the heavens. It’s a relatively rare example of Ireland competing at the highest level in both software and hardware in the same product.

“I suppose as a young kid, everybody is kind of fascinated by space exploration. So when you go over there, to ESA, and you see the type of work that they are doing, it’s uplifting,” says O’Leary.

“ESA is very supportive of indigenous European tech, and of Irish tech, too, and the relationship with ESA, because we have delivered everything that they’ve asked us to do, that has really given us confidence. So, you know, I feel proud.”