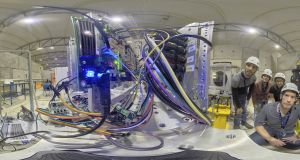 A360 degree view of the Intel Myriad 2 chip under test at CERN. Photograph: The European Space Agency

A new artificial intelligence (AI) processing chip developed in Ireland has undergone tests at the world-famous CERN centre in Switzerland to see if it is suitable for use in space.

Ubotica Technologies, a Dublin-based robotics start-up, recently collaborated with the European Space Agency (ESA) for the tests, which took place at the European Organisation for Nuclear Research, Geneva.

The centre is home to the €4 billion Hadron Collider, the world’s largest and most powerful particle accelerator, which was used to help discover the Higgs Boson.

The tests for the Myriad 2 AI chip, which were carried out last week, used CERN’s second largest particle accelerator, the Super Proton Synchrotron (SPS), which is located in a circular tunnel nearly 7 km in circumference.

To test its suitability for space, researchers used the SPS to blast the chip with radiation to see how it would cope under adverse conditions.

The agency said it is considering using the Myriad 2 chip for in-orbit image processing, which could potentially help future space missions reduce the data load sent back to Earth.

The Myriad chip architecture was originally developed by another Irish technology company, Movidius, which was acquired by Intel in a multimillion euro deal in 2016.

The Intel Movidius Myriad 2 chip for high-performance, low-power vision processing can be pre-trained with data to recognise particular features and patterns or perform in-depth 3D sensing.

The ESA said it was considering using the processor in a number of ways including for monitoring of the International Space Station. Other possible uses include being used for maritime vessel recognition.

While it might seem at first glance a little unusual that Irish companies are working with the space agency, it is anything but. Since 2000, more than 80 Irish companies, including the likes of InnaLabs, Arralis, Pilot Photonics, Radisens Diagnostics and Skytek, have secured ESA contracts exceeding €80 million in value.

1 Four things that could help Ireland escape from the Covid-19 recession
2 Brown Thomas and Arnotts shoppers will be able to book time slots for entry
3 Ross O’Carroll Kelly column 'not racist towards English people'
4 Tax and the Pandemic Unemployment Payment: Your questions answered
5 EU needs to rebuild GDPR after only two years
Real news has value SUBSCRIBE