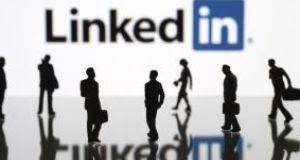 A breakdown of turnover reveals $939.9 million in revenues derived from the Republic

The Irish arm of LinkedIn reported a 20 per cent rise in revenues last year and returned to the black, helped by the the disposal of intellectual property assets to its parent Microsoft Ireland.

Accounts filed recently by LinkedIn Ireland Unlimited Company show it posted a pre-tax profit of just under $2.7 billion in 2017 compared with a loss of $779.4 million in the previous year.

The subsidiary, which manages LinkedIn’s European headquarters in Ireland, paid $127 million in tax last year once adjustments have been factored in.

Founded in 2003, and with an estimated 500 million members worldwide, LinkedIn was acquired by Microsoft in a $26.2 billion deal in 2016.

The online network, which employs about 1,200 people here, reported revenues of $1.57 billion for 2017, as against $1.3 billion a year earlier, the latest accounts show.

Some $939.9 million in revenues was derived from the Republic. Cost of sales jumped significantly over the 12 months, rising from $197.5 million to $496.2 million even as administrative expenses declined from $1.2 billion to $1.08 billion.

The company reported a $85.6 million operating profit as against a $369.7 million loss a year earlier.

LinkedIn, which did not pay a dividend to its parent, opened its first purpose-built facility outside the US at Wilton Place in Dublin last year following an €85 million investment.

The company said it employed 1,103 people in the Republic last year, up from 911 in 2016. Employee-related costs, including wages and salaries, more than doubled last year, climbing from $81.6 million to $173.7 million.

The professional networking platform, which is used primarily by jobseekers, said it was continuing to increase headcount locally.

“Turnover is expected to continue to grow throughout 2018 and the company will continue to expand its operations in Ireland to support that growth,” the directors’ report stated.

It was revealed last week that LinkedIn Ireland processed the email addresses of 18 million non-members and targeted them with advertising on Facebook without permission, according to an audit by the Data Protection Commission.