Travel technology company reports 16 per cent rise in revenues to €201.7m from €174m 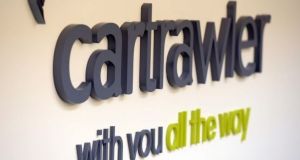 The company, which is headquartered in Dublin with additional offices in Tokyo, Helsinki, Manilla, Boston and Sydney, employs about 600 people globally

Irish travel tech company CarTrawler has reported a sharp rise in revenues as it gears up to expand its presence in the US.

Newly filed accounts for the company, which develops car-hire software for airlines and travel agencies, show turnover jumped by nearly 16 per cent last year to €201.7 million from €174 million as pre-tax profits rose to €19.9 million from €17.7 million.

The company, which is headquartered in Dublin with additional offices in Tokyo, Helsinki, Manilla, Boston and Sydney, employs about 600 people globally.

Founded by brothers Greg and Niall Turley in 2004, who grew it out of their family business Argus Car Hire, CarTrawler is now owned by BC Partners and Insight Venture Partners.

The average number of employees working at CarTrawler totalled 474 as against 433 in the prior year with employee-related costs rising to €26.3 million from €20.9 million.

Directors’ remuneration costs were borne by another group company and totalled €954,000, down from €1.17 million a year earlier.

Research and development expenditure rose to €5.4 million from €3.2 million.

While still predominantly focus on developing car-hire software the company has signalled its intent to broaden its relationship with end users by providing more services to them that extend beyond just car hire.

It has also increased its focus on designing products for the mobile space as it looks to expand beyond Europe..

Currently a considerable portion of CarTrawler’s revenues come from Europe but the company is also keen to increase its presence in the US.

Cormac Barry, previously head of Paddy Power Betfair’s Sportsbet business in Australia, took over as chief executive of the company from Mike McGearty earlier this year.

“Car Trawler is continuing to successfully deliver on its mission to bring opportunities to life for our partners, suppliers, customers and staff,” said Mr Barry.