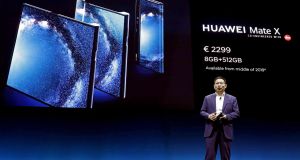 Just days after Samsung unveiled its first smartphone with a foldable screen, Huawei has shown off the Mate X, a similar device that has a considerably larger display than its rival, but also comes at a significantly higher price.

Huawei launched the Mate X at an event at Mobile World Congress in Barcelona on Sunday. It said the foldable smartphone, which is expected to be available in the Republic in mid-2019, will retail for €2,299, making it the most expensive phone on the market by some distance.

By comparison, Samsung’s Galaxy Fold, which was revealed at an event in San Francisco last Wednesday is set to go on sale sale at $1,980 (€1,745), while Apple’s highest spec Apple XS Max costs €1,679.

When folded, the device is a huge display smartphone with a 6.6in screen, and when opened, it turns into a slim tablet with an 8in screen. This compares to the Samsung Fold, which changes from a 4.6in display to a 7.3in tablet when opened.

The Mate X features slightly curved screens that fold backward so that, when closed, there are screens on both sides of the phone, meaning that those having their picture taken can also see the shot that is about to be taken. The device also does well in terms of charging capacity. It promises to deliver an 85 per cent battery phone recharge in just 30 minutes.

While Huawei’s new device will be available here come summertime there will be few opportunities for people to use it locally given that the rollout of 5G is still someway out.

Vodafone made a commitment in February 2018 to have 5G available nationwide within 24 months and it has been trialing it at select locations.

Huawei on Sunday reaffirmed its commitment to the rollout of 5G in the Republic, referring to existing partnerships with Eir and Imagine to introduce the technology locally.

The company, which is the world’s biggest network equipment company, is caught up in a clash between the United States and China over network security for the next generation of mobile services, with President Donald Trump’s administration claiming the company has enabled Chinese state espionage.

The US and a number of other nations have banned the use of the company’s 5G technology, and many other countries are also weighing up their options.

Locally, Vodafone has teamed up with Ericsson for the rollout of its 5G network.