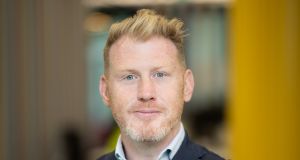 CreditLogic chief executive Eddie Dillon: ‘CreditLogic will lead to a situation where applicants need to provide half the level of information they currently do and much of that will be provided digitally.’

But the man who helped introduce the concept of opening a bank account using just a selfie believes he may have found a solution to the problem.

Dillon and two of his colleagues in KBC’s innovation hub left the bank late last year to establish their own start-up, CreditLogic, which is seeking to re-invent the mortgage application process using open banking, data analytics and artificial intelligence.

The company has developed a software platform for mortgage brokers and lenders that aims to transform the application process from something that takes weeks to something that will take minutes.

“Mortgage origination is an inherently broken process and is only going to get worse with the market doubling over the next four years,” said Mr Dillon, a former member of the Irish Mortgage Council.

“At the moment, it is a paper-based process that is largely administrative and time consuming. As many as 10 per cent of applicants don’t succeed and four in 10 have to apply more than once,” he added.

CreditLogic claims it can reduce applicant and processing effort significantly by streamlining application data capture, validation and review using technology such as AI.

The start-up, which has already raised close to €1 million and has plans to raise up to €2 million more, recently appointed Dr Martin Scott as its non-executive chairman.

Dr Scott is a partner at private equity firm Riverside, which funded the recent merger of Irish security monitoring company Netwatch with companies in the United States and the United Kingdom. He also holds a PhD in machine learning and artificial intelligence.

The other founders of CreditLogic are Gavin Bennett, KBC’s former head of development and Mary Brennan, a former senior programme manager at the bank.

While the platform is aimed solely at the B2B space, Mr Dillon said consumers will benefit greatly from it. “CreditLogic will lead to a situation where applicants need to provide half the level of information they currently do and much of that will be provided digitally,” he said.

“What we are not looking to do though is digitise the empathy that you as a customer need when going through the application process, or the advice you require,” added Mr Dillon.