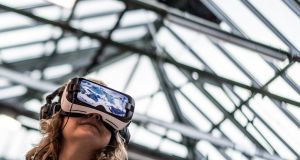 A visitor uses 2DF headset during the Re:publica digital conference in Berlin.

We are on the verge of being able to step into virtual and ‘mixed reality’ worlds where we can interact with favourite film characters and discover new story lines, said John Gaeta, the man who helped create the special affects in The Matrix and current Star Wars films.

The Oscar-winning Gaeta, who is the creative director for new media and experiences at Industrial Light and Magic (part of Lucasfilm, which is now owned by Disney), told an audience at digital culture festival Re:publica here that ILM’s xLab division is working to “translate worlds” from those you watch in the cinema “into worlds that you can walk into.”

“There’s going to be an evolution in the way theme parks are developed and experienced,” he said.

He and his team are currently working to produce an interactive Star Wars world for Disney theme parks, though he said he could not offer any details.

He added that as technology continues to advance, interactive, immersive worlds would be something individuals could experience at home, outdoors, or in public locations.

Already, those working on films or games use technology to visualise scenes and the worlds they are set in. “At some point, in and of itself the visualisation becomes a new form of experience,” he said.

Mr Gaeta said he thinks people are getting too “fixated” on virtual reality at the moment. “Mixed reality” – in which the virtual can be overlaid on to the real world – “is potentially, going to bigger.”

Re:publica video: the future is female

In this new form of entertainment, people would be able to step into, say, a Star Wars location and then experience and become involved in different stories based on what they decide to do.

“We go to a cinema to be told a story. You want that unexpected thing to happen. In a destination, we could plant all sorts of stories to be discovered.”

But with mixed reality, they could also participate as themselves, and see their friends as themselves in the virtual world, as opposed to computer games now, where people select a computer-generated character.

He noted, “I don’t think it is out of the question that in the next 10 years, computer constructs will look flawlessly real.” In addition, these virtual worlds will be able to incorporate ‘haptics’ – touch technologies.

People will broadcast themselves into virtual worlds in all sorts of ways, Mr Gaeta said.

“What’s really going to be amazing” is that in multiple or mass user worlds, people will be able to livestream themselves straight in to various unfolding stories. “Some people will be just wandering around and watching, and some will be streaming in as performers [in the story] that others watch.”

Such worlds won’t have the same linear timeline as a film, he noted.

The technology would be commonplace and easy to use. “In 10 to 20 years, you’ll have one set of glasses that you can dial between zero VR and full immersion.”

Tomorrow’s children would see participation in such worlds as the norm, and would spend hours in immersive worlds in the same way we currently spend hours using screens. He accepted this could pose “dangers” such as accidents, and some rate of addiction.

“Addiction to [this] is inevitable, but it can get much worse; there will be people that possibly will like their mixed reality fantasy world better.” There will be “a generation who comes into this and will just spend hours and hours. That’s going to happen with VR and MR and it’s a danger.”

But overall he is positive about this immersive future- except for one scenario he offered at the end of his talk.

“We can be in these totally fictitious worlds and at the same time, computers are going to get so smart that they’ll leave us in there for hours and hours, while they’ll be taking over the world,” he joked.